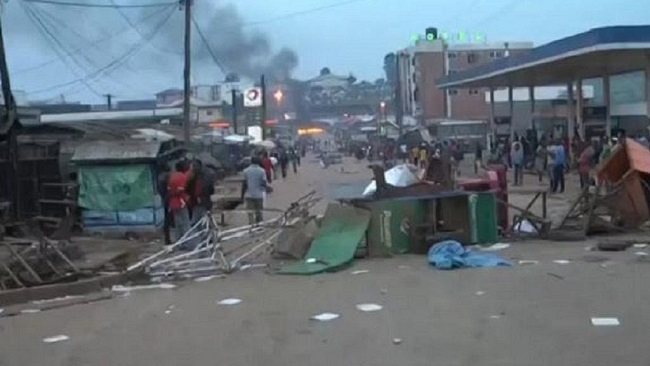 Southern Cameroons War: ‘We live in fear in Bamenda’ 0

We live in fear and are traumatised by the fighting in Bamenda. This once peaceful and lively city in Cameroon has become a battleground between government forces and rebels demanding an independent state for the central African nation’s English-speaking minority.

More than half the city’s population of about 400,000 have fled their homes in the last few months, either to safer neighbourhoods or to mainly French-speaking towns and cities unaffected by the conflict.

Protests over the increasing use of French in courts and schools in Cameroon’s English-speaking heartlands, the North-West and South-West regions, morphed into violence in 2017.

A security force crackdown led to some English-speaking civilians taking up arms against the government, led by the French-speaking President Paul Biya.

Now, the sound of gunfire has become familiar, even to two-year-olds, as has the sight of abandoned corpses on the streets of Bamenda, the city with the biggest English-speaking population in Cameroon.

The image of four boys shot dead by troops just 200m (656ft) from my home has stuck with me.

They were ordinary boys in my neighbourhood who, unfortunately, were caught smoking marijuana, an activity the security forces associate with separatist fighters.

The security forces are also suspicious of teenagers with dreadlocks or those who look unkempt. It is assumed they have come to the city after receiving military training in the bush.

Even stout men like me arouse suspicion – the logic of the security forces is that if you are well-built, the chances of you being a fighter are greater.

And many parents beg their teenage sons to stop wearing red bandanas or a combination of red and black clothes because the security forces could mistake them for separatist fighters. The colours are associated with the rebels.

Armed groups have sprouted in Bamenda and neighbouring towns. Some of them are made up of separatist fighters, while others are criminal gangs which have exploited the instability.

It is not always clear who is behind attacks, but there are lots of kidnappings of schoolchildren, politicians and other high-profile personalities who, in most cases, are released after a ransom is paid.

In the latest kidnapping, 80 school pupils, their principal and a teacher were freed after being seized from their school about a week ago.

Separatist fighters denied involvement, but the government blamed them for the abductions.

Tens of thousands of children have been sent by their parents to schools in safer cities and towns.

Separatists have ordered the closure of all schools until the government agrees to hold a referendum on whether the mainly English-speaking regions should become independent.

A few schools have remained open, but attendance has fallen sharply. In schools where there were around 8,000 pupils there are now 700.

The few brave children who still go to school do so surreptitiously. They do not wear uniforms, and stroll down roads as if they are going to the market before sneaking into classrooms.

Last month, an American missionary and a university professor were also killed in the space of three days in Bamenda.

The main mortuary is often full, mostly with the corpses of civilians caught up in the fighting between the separatists and the military.

No neighbourhood is safe, and I cannot remember the last time I visited my friends. It is as though we have been caged. Sometimes, we are forced to stay at home for days because of battles on the streets.

We are on edge all the time. I recall returning home from the gym at around 17:45 one day. People were running helter-skelter.

I was perplexed. “Probably there’s a gun battle ahead of me,” I thought, as I advanced cautiously towards the source of the disturbance.

The commotion grew as I approached Nkwen Market, a hotspot in Bamenda. There was a huge traffic jam and I could see people frantically fleeing the streets.

I knew I was taking a risk but had no option other than to go through the market to get home.

There was no prior warning, so people were rushing to get home, fearing that they would be shot by the security forces if they were still on the streets at 18:00.

The curfew is intended to restrict the activities of separatist fighters, who take advantage of the darkness to carry out attacks on the security forces.

The conflict has destroyed Bamenda’s nightlife. Some of the city’s off-licences and nightclubs – which were famed to be among the best in Cameroon – have closed down. Others have relocated to French-speaking cities.

The insecurity is even worse in Kumbo, the largest city in the North-West after Bamenda. The two cities – about 110km (70 miles) apart – have been cut off from each other. Separatist fighters are said to have destroyed a bridge, and have also strewn the road with felled trees and large rocks.

Kumbo gets its supplies from Bamenda and my relatives there tell me that its markets have been shut for more than three weeks following fighting between the security forces and separatists.

The separatists also impose what they call “ghost towns”. They are typically observed on Mondays when nothing functions – markets, courts and offices are shut, and vehicles remain parked.

Many companies have therefore made Saturday a working day to compensate for the lost Monday, but sometimes the separatists order a shutdown for the entire week.

The situation is even worse in small towns like Bafut, Bali, Batibo, Bambui, and Bambili where fierce battles break out, forcing civilians to escape into the bush.

Hundreds of people – civilians, separatists and soldiers – have been killed and about 436,000 have been displaced in the North-West and South-West, with fears that the number will rise as fighting escalates.

I, myself, am under pressure from my family to leave – if not for my sake then for my children’s.

I have resisted the pressure so far, hoping that the government and secessionists make a peace deal so that our lives can return to normal.