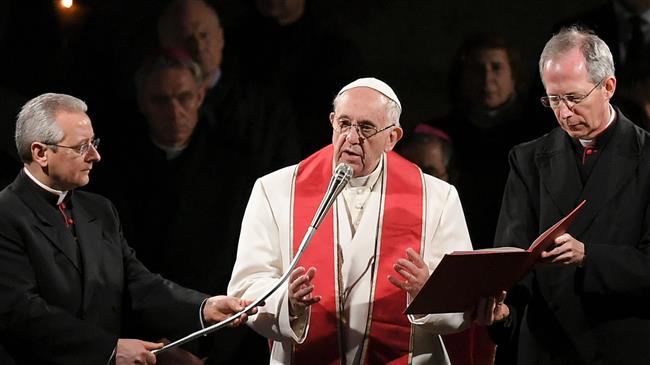 The Vatican has attempted to clarify reported remarks by Pope Francis in which he appears to reject the existence of hell, contradicting the teachings of the Catholic Church on the issue.

In a brief statement released on Friday, the Holy See said that an article published by Italian newspaper La Repubblica on Wednesday and written by its founder, Eugenio Scalfari, was not “a faithful transcription of the Holy Father’s words,” describing it as “the fruit of his (Scalfari’s) reconstruction.”

According to the daily, Pope Francis held a private meeting with Scalfari before the Eastern weekend. During the meeting, the pontiff was reportedly asked about the fate of “bad souls.” He was quoted as responding, “They are not punished. Those who repent obtain God’s forgiveness and take their place among the ranks of those who contemplate him, but those who do not repent and cannot be forgiven disappear. A hell doesn’t exist, the disappearance of sinning souls exists.”

The Vatican said that the “literal words pronounced by the pope are not quoted” and that “no quotation of the article should be considered as a faithful transcription of the words of the Holy Father.”

The teachings of the Catholic Church affirm the existence of hell.

Pope Benedict XVI emphasized in 2007 that hell “really exists and is eternal, even if nobody talks about it much anymore.” Pope John Paul II also stated in 1999 that hell was “the ultimate consequence of sin itself… rather than a place; hell indicates the state of those who freely and definitively separate themselves from God, the source of all life and joy.”

The 93-year-old Scalfari — an avowed atheist — is known for priding himself on not taking notes or recording high-profile interviews, and this is not the first time he has been accused of misrepresenting Pope Francis. He was rebuked by The Vatican in 2014 for an article claiming the pope had abolished sin.

Pope Francis did raise controversy back in January, when he defended a Chilean bishop named Juan Barros who stood accused of protecting a pedophile priest close to him.

“There is not a single piece of evidence against him. It is all slander. Is that clear?” the pope said at the time when asked by reporters about Bishop Barros.

US Cardinal Sean O’Malley of Boston then described the pontiff’s remarks as “a source of great pain for survivors of sexual abuse by [the] clergy or any other perpetrator.”