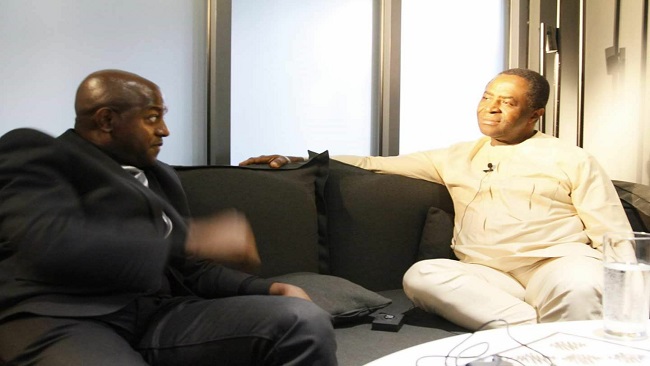 Ambazonia leaders will continue to battle from behind bars 0

The Ambazonian who is shaping French and Southern Cameroons political future was taken back to his small room where a huge wall separates him from the other jailed members of his cabinet and visitors. Sisiku Ayuk Tabe, the Interim president of the Federal Republic of Ambazonia was charged with rebellion, sedition and terrorism and sentenced to life in prison by the Yaoundé Military Tribunal.

President Sisiku Ayuk Tabe was the main figure in what is now known to be the most important political case ever brought before a Cameroonian court. The Ambazonia president is one of 10 Southern Cameroons civil leaders who appeared before the Yaounde Military Tribunal on charges related to secession and subsequent declaration of independence.

The Military judges that dealt with the case were all from President Biya’s Beti Bulu tribe. It was through their hands that La Republique du Cameroun handed over the controversial verdict on the gravest political crisis the country has faced in its 57 years of so-called reunification. The trial process and the judges were manifestly biased and acted following a President Biya- French Cameroun political criteria.

No one expected that the Sisiku Ayuk Tabe trial was going to be fair! But it has become a lever for democratic change in the face of a state which has greatly regressed in democratic terms. President Sisiku Ayuk Tabe may be behind bars, but the Ambazonia leader has serious political clout and remains in charge of the Southern Cameroons revolution.

The leaders in the diaspora have attempted to impose a lockdown in Southern Cameroons which some have argued is unfortunately winding down the struggle. Some political commentators including Dr Joachim Arrey of the Cameroons Concord News Group have opined that the changing dynamics in the crisis calls for a different approach and that using crude means to mount pressure on the Biya Francophone government could be counterproductive.

However, Ambazonians view the Yaoundé Military Tribunal and the French Cameroun political elites as those unfairly prosecuting their leaders for defending the basic democratic rights of Southern Cameroons citizens. The children of the jailed leaders have not been able to see their dads for more than two years only because their fathers are defending the right of Ambazonia to exist.

In his indictment of the Ambazonia leaders, the French Cameroun judge described the actions of President Sisiku Ayuk Tabe and his aides as an attack on La Republique du Cameroun’s constitutional order.

Of course the Southern Cameroons leader declaration of independence was to force La Republique du Cameroun to accept the separation of that territory now referred to as the one and indivisible Cameroon, a goal that he still maintains will be attained.

President Sisiku Ayuk Tabe told our Yaounde city reporter that he and his cabinet ministers were not guilty of any of the offenses they were charged with.

President Ayuk Tabe observed that he’s ready to spend as many years in prison as it takes until Southern Cameroons gains its independence.  Many including some in French Cameroun believe the Ambazonia leaders should not have been given a life sentence.

Sisiku Ayuk Tabe had pointed out some few days before the Yaounde Military Tribunal verdict was made public that even if it sounds strange, unilaterally declaring the independence of a territory is not a criminal offense.