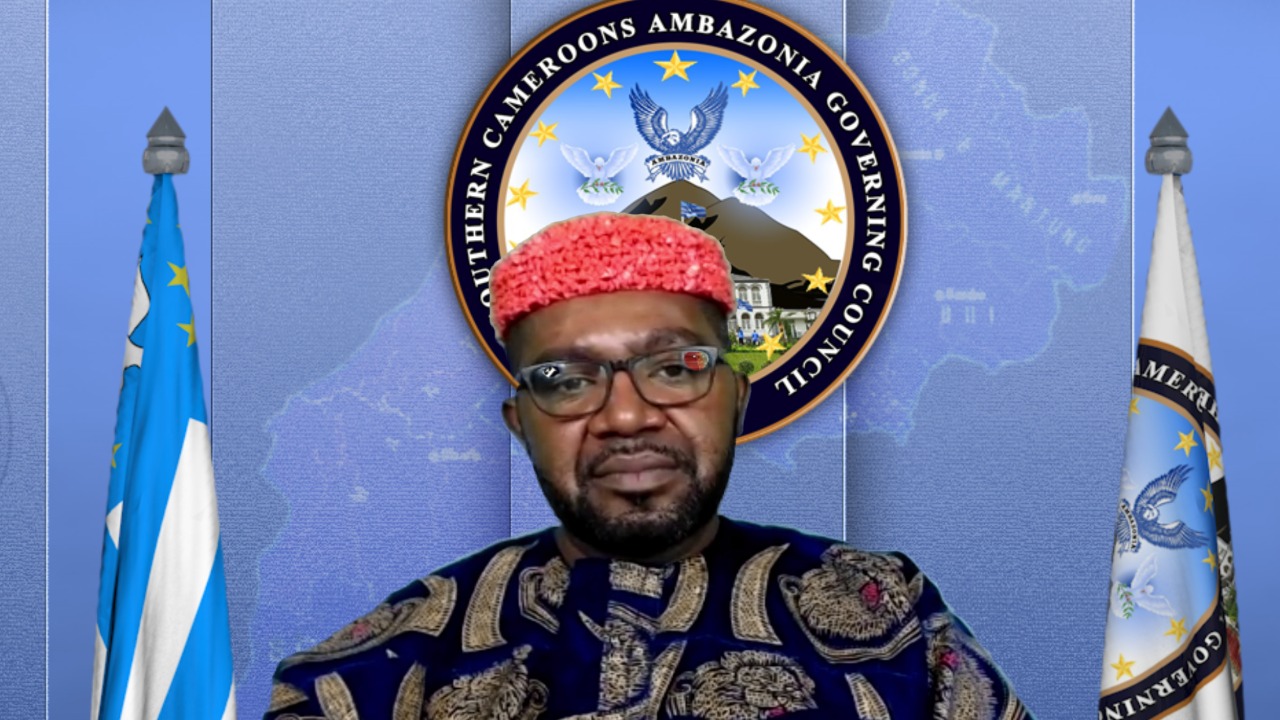 In line with what has become our custom since we rose in 2016 to defy our 6 decade long occupation by the French neo colonial regime in next door Cameroon, I come before you today to address you on another upcoming electoral scam, and their 11 February celebration.

I call on you as you have done since 2016 to in silent resolve and defiance, maintain a total shutdown of out entire territory from sunrise on February 7, 2020, to sundown on February 12, 2020. To rather spend the time at home in solemn remembrance of the lives of our people cut short by this Cameroon war of extermination against our communities.

While the loss of these lives under such horrifyingly wicked circumstances has been heartbreaking to us  as a nation, it must have been a profound personal loss to the mothers, the fathers, the husbands and wives, brothers and sisters, and above all the children they left being. All Ambazonians join you at this time to mourn your loss ones.

The Cameroon regime and their sponsors in Paris seemed to have made the devilish decision that they will kill and burn their way into our subjugation.

Just in this first month of 2020, in Kupe Muanenguba they have burned to the ground the villages of  Babubock, Muedibmel, Ebase, Ekanjoh, Bermin, Balock, Elah, Deck, Eyandong, Ndibe, Ntale, and Bambe. More villages have been burnt down in Lebialem and many more in the North zone. While killing more than 400 people in the process.

The regime has deployed thousands of forces under the guise of election security, for an election in which not a single credible election monitor in the world is participating, supposedly the real plan is for these forces to finish off our movement for independence once and for all, for which we now see them dial up the village burnings and random attacks on our communities from north to south.

The history of our struggle is dotted with such moments to proof that all measures devised and executed to undercut our struggle for our fundamental rights instead of an honest engagement have backfired and only strengthen our march to freedom.

The savage and vicious decision to attack peaceful protesters with live ammunitions from helicopter gunships backfired, the devious plan to cut internet access so the world does not see images of the horrors they were meting out on our people was brought to nought. The same can be said of the millions spent for the bilingualism commission, disarmament commission, national dialogue, and most recently bribing and paying off shady characters to deceive helpless refugees and fly them to Yaounde for propaganda photo opportunities.

When a situation of such a great undertaking involving the fate of the Ambazonian people who have suffered brutal occupation for six decades, I am superstitious enough to believe that we can turn this what the enemy has planned into another breakthrough moment in our march to freedom.

Which brings me to the unfortunate events that occurred in Bui a couple of days ago, in which some of the groups that supposedly defend our communities decided to turn their weapons on their fellow Ambazonian brothers and sisters, reminiscent of a similar situation in Guzang not too long ago; between the same Comrade Sako’s group and ADF. We have seen people throw their hands in the air in despair and declare this spells the end of the movement. That is absolutely folly!

The overwhelming majority of our self-defense forces totally disagree with the premise of the supposed squabble between the ADF of Dr Ayaba Cho and the social media rants of Comrade Chris Anu.

ADF via Comrade Tapang Ivo, apparently on the grounds of being a Governing Council declared that they will use their supposed access to more guns and bullets to stop Comrade Sako’s LGA by LGA approach to self-defense. While Comrade  Chris Anu declared on behalf of Comrade Sako’s group that on the bases of being an interim government only their  LGA by LGA approach to self-defense is allowed in Ambazonia everything else in banned. Now, both ideas are wrong in every which way one looks at it. Both smack of bullying the one thing Ambazonians must have zero tolerance for after 6 decades of feeling it in our bones.

The idea that any Ambazonian will try to prohibit another from defending any community for the simple reason that they are not members of their group is offensive on its face. Until the Ambazonian people elect their constitutional conventions to draft the laws of the land after independence and vote to establish those as the laws of the land, anyone conferring on themselves the right to ban other groups as opposed to working to convince more Ambazonians to their cause is a usurper.  I trust this is not considered a threat, but only the making of a point that while self evident some seem to have overlooked. This, has taken a deadly tool on our brave young women and men:

That some people from Cameroon next door and even from Ambazonia seek to destroy this revolution, and will use every excuse in the book to do so,  I will neither affirm nor deny, and if those people exist, I sure would not waste my breath with them. To those, however, who really love this revolution and see it as a possible spark for real freedom in the 21st century, not just for our people but for all of Africa, I say this:

Our self defense forces have achieved nothing less than a miracle in defending our communities against the largest military in central Africa, trained and equipped by France, as well as on occasion by Britain, Germany, the United States, and Israel.

Ambazonians, we are Sisters and brothers, our only enemy is the occupation regime that has brutalized our people for 6 decades, and cheapen our lives as to shoot our kids and dump their remains on the road side in Buea, shoot our four months old eight times in the head in their sleep as they did to Baby Martha in Muyuka, or burn our fabled grandparents in their beds in their homes like Mama Apiah in Kwakwa. Though our passion for the revolution might have caused a strain in our relations to a fellow comrade, it must not break the bonds of affection that bind us together as Ambazonians from the shores of the Atlantic in Victoria to the banks of the river Matezen. It is time for reconciliation. May the chorus of Ambazonia land of freedom once again give wings to the better angels of our  nature.

Let us strive on to finish the work we are in, to free Ambazonian from the 6 decade long clutches of occupation, taking care of  those defending our  communities with their bare bodies, our wounded soldiers, widows, orphans, prisoners of conscience, IDPs, and  refugees.

Fellow comrades, as I come to conclusion I would once more appeal that everyone in the diaspora focus on two things:

1.) resourcing our brothers and sisters on the ground defending our communities and give them a better chance against the enemy,

2.) come together with comrades and solidarity partners in your various communities around the world to do advocacy work towards alerting the world that there is a genocide going on and the world is turning a blind eye to it.  Our leadership team and researchers are open to work with any community or comrades around the world to help them understand exactly what kind of advocacy work they can focus on in their community of residence to move the struggle forward, and I believe strongly that as we all focus in contributing our own quarters, we will become less and less frustrated and that’s how we will bring the regime to its final end.

In conclusion I think we don’t say this enough, that we are very grateful for the commitment and sacrifices made by fellow comrades who have taken up the role of activist in this revolution from day one. Your energy too is part of the big fuel that’s pushing our struggle and our leadership team commends your efforts. I wish to however caution that as much as our activist use of social media has been one of our biggest assets in this revolution,  there is also the spirit of excitement and in some instances negligence that is creeping in and some of those activities of our activists gives free intelligence to LRC which in some instances have led to  our heroes targeted and even killed. This complicency must be stopped in its tracks. I believe that the activists coming together as SCAAF are serious comrades and I must put it to them that actions speak louder than words  and they should have this as one of their key areas of focus so their efforts help the struggle better. Activists must be the vanguards of truth, not politics.

On that note it’s worth mentioning that the department of communications in solidarity with the ambazonia national mourning and lock down is launching the hashtag #Ambaexit campaign across social media and we must all be part of it to make the world hear our aspirations.

From the 7th to the 12th of february , as ground zero once more shows the world through ghost towns that we are not part of la republic and won’t take part in their illegal elections in our land, It will be our duty in the diaspora to in solidarity during this time raise adequate resources to support our communities and also increase our voices and advocacy work on calling for an independent international fact finding mission to go on the ground and establish the facts as the first step towards forcing the regime to end the senseless killings.