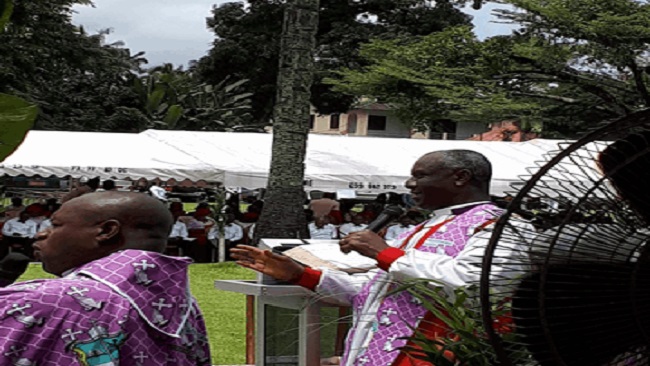 A CELEBRATION of ten years of the Anglican diocese of Cameroon was held in the open air at the largest city in Cameroon, Douala, on 26 August.

The day dawned bright and dry, and 1500 worshippers celebrated a eucharist, accompanied by choral music, and a sermon by the Bishop of Ohaji Egbema, in Nigeria, the Rt Revd Chidi Collins Oparaojiaku.

The eucharist was celebrated by the Bishop of Cameroon, the Rt Revd Dibo Thomas-Babyngton Elango. He also invested 15 Knights — lay members who have contributed spiritually and materially to the development of the Church — during the service.

The Bishop preached in the centre of the quadrangle of open-sided marquees erected to shade the congregation from the sun. He commended the faithfulness of the Anglican Church in Cameroon, and congratulated the diocese on its achievements over the past decade. He reminded listeners that all things were achieved only by the grace of God.

The congregation responded with loud Amens of approval, and joined enthusiastically when he began an unaccompanied rendition of “Great is thy faithfulness”.

Sustained by a packed lunch of chicken and rice, the congregation enjoyed musical contributions from the diocesan choir, which sang an anthem by Handel, and by visiting choirs, which sang traditional African spirituals and modern gospel. The Boys’ Brigade provided percussive interludes. The service was long, and at points chaotic, but always joyful.

The Church of England link diocese of Chichester was represented by Canon Mark Payne, the Rector of St Pancras, Chichester, and Canon of the Cathedral of St Michael and All Angels, Douala.

Anglicanism was brought to Cameroon in the mid-20th century by an expatriate community of West African business owners, who set up churches, including what is now the cathedral. Cameroon was initially a missionary area under the Church of the Province of West Africa (CPWA). It was only in 2008 that it achieved full status as a diocese in the CPWA, and Bishop Elango was ordained and consecrated to the office of Bishop: the first Cameroonian to hold the position.

The diocese has now expanded to 28 churches across nine parishes, served by 16 full-time clergy and eleven catechists. The diocese has an ambitious and largely self-funded building programme of churches, clergy accommodation, schools, and a health clinic. In a country without a welfare state, this contribution to education and health care has a significant impact on the life chances of young people in particular.

The tenth anniversary comes at a time of significant civil unrest in Cameroon, as anger and frustration in Anglophone regions about perceived marginalisation by the Francophone majority spills over into violence. The Anglican Church ministers to both English and French speaking communities.