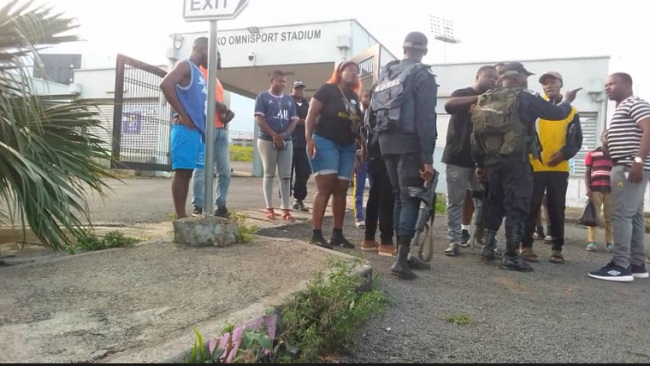 Cameroonian authorities must identify and hold to account the policeman who assaulted journalist Eyong Macdella Bessong while she was covering a May 18 football match in Buea, the capital of the Southwest Region, and should hold accountable the stadium official who manhandled her and asked police to remove her from the property, the Committee to Protect Journalists said on Thursday.

Bessong, a reporter for pan-African privately owned sports news website kick442.com, was accosted and dragged away from the main pitch minutes before the opening whistle by Njonje Mbua, the Molyko Omnisport Stadium’s director, because she could not produce a hard copy of her press accreditation and only had a digital one on her cell phone, according to news reports, kick442.com editor Angu Lesley, and Bessong, who both spoke to CPJ via messaging app and phone. Minutes earlier, the digital copy of her press accreditation was accepted by an official controlling access to the match, those sources said.

Mbua refused to recognize the press pass on Bessong’s phone and insisted that she either buy a ticket or return home to retrieve her physical press pass, the journalist said. She told CPJ that the stadium director manhandled her and grabbed her torso, touching her breast, so she bit his hand, prompting him to order a group of six policemen to remove her from the property.

Bessong said two uniformed police officers, whose names she did not know, grabbed her and tried to drag her away. When a group of footballers recognized her as a journalist and asked what was going on, Bessong explained and pulled out her phone to show them her press card. One of the two policemen mistakenly believed she had taken photos of him and was showing them to the footballers and ordered her to delete them, Bessong said. The policeman then pulled her hair, slapped her at least three times across her face and neck, head-butted her, threw her on the ground, kicked her, and called her a prostitute, she told CPJ.

“Authorities and the Cameroonian Football Association must take swift and decisive action against the stadium official and policeman who humiliated and viciously assaulted sports journalist Eyong Macdella Bessong while on assignment,” said Angela Quintal, CPJ’s Africa program coordinator, in New York. “The chauvinism and sexist slurs that female sports journalists endure are bad enough, but to compound these with gratuitous violence is simply intolerable. Journalists must be free to do their jobs without harassment from any quarter.”

Lesley, Bessong’s editor, told CPJ by phone that Bessong, who was running late and was focusing on photographing the start of the match, heard Mbua calling her but ignored him because she didn’t realize that the call was coming from a stadium official. Instead, she believed she was the subject of an unwanted advance, a common hazard for women in Cameroon. Mbua then confronted the journalist, grabbed her and touched her breasts, and began dragging her away, resulting in the journalist biting his hand to free herself, said Lesley. Mbua then summoned the police, who assaulted her, he said

The police officer “slapped me, [head-]butted me, and then threw me to the floor and kicked me,” Bessong told CPJ. “He was talking in French, saying ‘’you prostitute, you are coming to look for customers, you can’t identify yourself, you come to claim you are a journalist, but you’re a prostitute, you think I’m one of those clients, you come and lure men to sleep with you, you come to the stadium and  pretend you’re a journalist, you cannot identify yourself. Bordell [prostitute]’,” Bessong told CPJ.

Lesley said he drove to the stadium after Bessong called him and recounted the events. He said he tried unsuccessfully to intervene with Mbua and another football official to ensure she would be allowed back in to cover the remainder of the match, and only succeeded when he called a top football administrator in the capital, Yaounde, who ordered the stadium director to allow the journalist back in. Lesley said Mbua eventually apologized to him, but not to Bessong.

After the game ended and they were leaving the stadium, Bessong pointed out the two policemen, Lesley said, adding that he warned them not to ever do that again to his worker. The policeman who assaulted Bessong proceeded to insult Lesley, calling him a dog and other “names that I won’t repeat,” said Lesley.

Mbua, the stadium director, has been summoned to appear for questioning in connection to the attack at the judicial police in Buea on May 31, Lesley said, adding that he did not know the name of the policeman and that he hoped the director would identify him to the authorities.

Contacted by phone, Mbua denied assaulting Bessong and claimed the “issue took place among uniform people.” “I do not have the power to ask a uniformed person to beat somebody, I am not a governor, I am not in the military,” he added.

“I called her three times, but she refused to come,” he said of Bessong. “I went and blocked her, she refused, and I asked her to introduce herself. She held my right hand with her two hands,” he said.

Mbua also claimed that when the police called Bessong to check her accreditation she refused and insulted them and that was when they “held her with force.”

Mbua claimed the subsequent outrage from the media community was because he had refused to let journalists to play a football match at the stadium on Mary 3, World Press Freedom Day. “This is where the problems began,” said Mbua.

Contacted by messaging app for comment, Ernest Obama, communication director of the Cameroonian Football Federation, Cameroon football’s national controlling body known by its French acronym Fecafoot, said he would respond but did not reply to a follow-up text message.

Reached for comment via messaging app, Alex Siewe, the communications director for the Confederation of African Football (CAF), the controlling body representing national football associations on the continent, said the group needed more details about the attack before it could comment. A phone call to the Buea central police station was picked up but nobody on the line spoke. National police spokeswoman Joyce Ndjem did not respond to CPJ’s request for comment via messaging app.

Culled from Committee to protect journalists