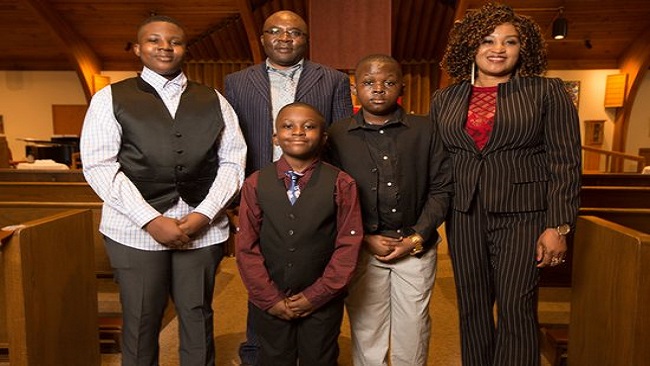 Cameroonian family of five receives sacraments of Baptism, first Communion, confirmation and convalidation of a marriage together 0

Baptisms, first Communions, confirmation and convalidation of a marriage.

All happened one day last August at Blessed Sacrament in St. Paul among members of the Larry and Judith Ngonu family. The couple and their oldest of three sons, Joe Carlyn, are natives of Cameroon. They were strengthened by their faith in a long path to the United States and full communion with the Catholic Church.

The journey was made as a close, strong and persevering family, one that prays the rosary together every evening.

“You pray a rosary with all your heart, you will see like miracles,” Judith said. “The boys will remind me that it’s time to pray.”

A lottery win in 1999 enabled Larry, then a resident of Cameroon, to start a path to a new life. No, he didn’t win a large cash prize. He won the chance to move to the United States and pursue education and career opportunities. And raise a family.

Judith, who married Larry in a civil ceremony during a brief visit that he made to Cameroon after he emigrated, would say that her biggest “win” happened last summer, when the couple’s marriage was convalidated on the same day their three sons received sacraments including first Communion.

“That was my best day ever,” she said.

Larry won his immigration opportunity through the U.S.-sponsored Diversity Immigrant Visa Program. Winning applicants’ names are drawn at random each year. After interviewing for the visa process, choosing a sponsor and waiting for paperwork to be processed, he moved to the U.S. in November 2000.

Jaden, left, and his brother Tyrick lead the procession at the start of Palm Sunday Mass March 28 at Blessed Sacrament in St. Paul. DAVE HRBACEK | THE CATHOLIC SPIRIT

As children, Larry, 50, and Judith, 44, were baptized and received the Eucharist and the sacrament of reconciliation in Cameroon, where Judith was also confirmed. Joe Carlyn, 15, was baptized in Cameroon. Larry said his home country has a lot of religions, but the Catholic faith is predominant.

It took about eight years of waiting and paperwork before Judith and Joe Carlyn could join Larry in the U.S. Their two youngest sons, Jaden, 11, and Tyrick, 8, were born in the U.S.

Living in Maplewood today, the family felt welcomed when they visited Blessed Sacrament. “People said ‘welcome, where are you from?’” Judith said, adding that it quickly felt like home.

All five attended the Rite of Initiation of Catholic Adults (and Children) at Blessed Sacrament starting in fall 2019 as they prepared to receive more sacraments.

Connie Hill, faith formation director at Blessed Sacrament, described the Ngonus as a fervent and faith-filled family that perseveres.

“It was so humbling and such an honor to work with them because they were so faithful and so committed to the many preparations,” she said. She noted “all the things that the boys did” to complete the Catechesis of the Good Shepherd and prepare for their sacraments.

Because the COVID-19 pandemic canceled Easter Masses in 2020, the Ngonus were unable to receive sacraments at the Easter Vigil. But the pastor of Blessed Sacrament, Father Benny Mekkatt, a member of the Congregation of the Sons of the Immaculate Conception who is known to parishioners as Father Benny, held a special Mass for the family and their guests last August, and administered sacraments.

Ngonu family members and friends from Maryland and Ohio attended the church service celebrating the convalidation of Judith and Larry’s marriage and to see Larry confirmed, the two younger boys baptized and all three boys receive their first Communion. “It was a beautiful celebration,” Father Benny said. “It was a great thing,” Larry added.

Judith said she felt a big change that day physically, spiritually and emotionally. “I was so happy standing in front of God, to watch all those things,” she said.

After the service and to help prevent spread of the novel coronavirus in the midst of the pandemic, the family and guests celebrated with a socially distanced barbecue in a local park.

Joe Carlyn will be confirmed in May. The other four family members usually attend his confirmation classes because they follow Sunday Mass and it’s a chance to learn more, Judith said.

The two youngest boys serve at Mass every other Sunday, and they assisted with Stations of the Cross during Lent. Larry said he served at Mass when he was younger; he and his wife explained to their children that it was a privilege to serve.

Coming all the way from Africa, the journey was not easy for the family, Father Benny said. “But they persevere with a strong faith and also to keep their faith strong and bring that beautiful tradition from back home and bring up the children in a strong faith,” he said.

Asked what it means to be Catholic, Larry said that with Christianity in general, it means feeling close to God. “It builds you up, it makes you stronger,” he said. “It gives you a moral compass. It helps you do the right thing.”

Judith described frequently praying to Mary and the saints, such as St. Jude when facing difficult situations, and praying the rosary together as a family each evening. Larry joins when he is not working.

“I think God is your companion, like my everything,” Judith said. “When I need something, I just go down on my knees. When I want to do anything, I’m like, please God, just show me the direction. And he always answers my prayers.”

Culled from The Catholic Spirit