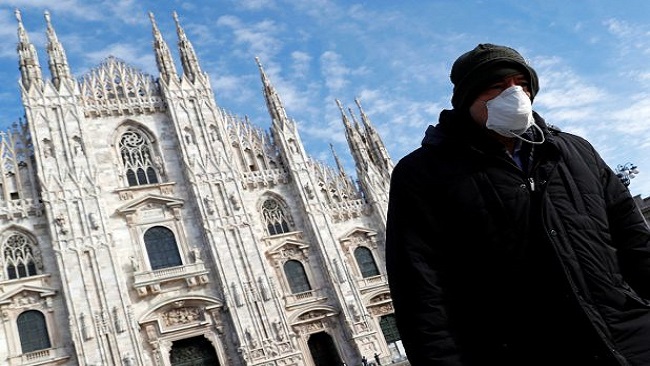 Italy has placed entire areas — including the financial capital, Milan — under forced quarantine in an attempt to contain an already widespread outbreak of the new coronavirus.

The new measures, announced by Italian Prime Minister Guiseppe Conte early on Sunday and taking immediate effect, imposed a lockdown on Lombardy, Italy’s northern rich region, as well as 14 provinces in four other of the country’s 19 regions. Some of the major cities included are Milan, Venice, Modena, Parma, Piacenza, Reggio Emilia and Rimini.

“We are facing an emergency, a national emergency. We have been applying precautionary measures from the beginning and we are facing the situation with awareness and without underestimating it,” Conte said in a televised speech as he announced the draconian measures.

The measures included the closure of all museums, cultural centers, cinemas, theaters, and other public venues and events in the affected areas, impacting a total of 16 million people in the country of 60 million.

“We want to guarantee the health of our citizens. We understand that all these measures will create inconveniences… But this is a time when we must take responsibility for ourselves. We need to understand that all of us need to adhere to the measures. We need to protect our own health, the health of our dear ones,” the Italian prime minister added.

The decree also banned city commute within the designated areas other than for emergencies or “essential work reasons.”

“There will be no movement in or out of these areas, or within them, unless for proven, work-related reasons, emergencies or health reasons,” Conte said.

Italy’s Civil Protection Agency announced in a statement that the number of coronavirus cases in the country reached 5,883 on Saturday, the biggest daily rise since the epidemic began just over two weeks ago.

Angelo Borrelli, the head of the agency, also told a news conference that the number of fatalities had risen to 233 people, up by 36.

Italy is now the country with the highest deaths after China, where the virus first emerged.

The measures taken by the Italian government on Sunday are similar to those adopted in China’s central Hubei Province, whose nearly 60-million-strong population has been kept under quarantine since late January.

The total number of the people diagnosed with the coronavirus, known as COVID-19, has passed 100,000 worldwide, while 3,500 people have lost their lives across 95 countries and territories.

Meanwhile, six people were confirmed dead on Sunday following the collapse of a hotel used as a coronavirus quarantine facility in the eastern Chinese city of Quanzhou.

The Chinese Ministry of Emergency Management said rescuers had also retrieved 38 survivors from the rubble — with five in critical or serious condition — out of the 71 people initially trapped in the building.

The hotel’s first floor had been under renovation before the collapse of the building in the coastal city on Saturday evening.

Over 3,600 released from quarantine in North Korea: Reports

Also on Sunday, media reports said North Korea had released some 3,650 people quarantined over the new coronavirus after imposing strict restrictions and closing its borders in order to prevent the outbreak.

The individuals had been kept under quarantine in Kangwon and Chagang provinces, North Korea’s state radio reported, according to Yonhap news agency.

North Korea’s official KCNA news agency also announced on Friday that 221 out of the 380 foreigners who were under “strict medical monitoring” had been discharged from isolation.

Pyongyang has banned tourists and suspended international trains and flights to and from the country.

In a related development, the Maldives reported its first two cases of the coronavirus infection on Sunday.

Local authorities said the two infected individuals — both of them staffers at a Kuredu Island resort facility — had tested positive late on Saturday and were suspected to have contracted the disease from an Italian tourist who had also tested positive after returning to his home country.

The Maldives restricted movement on Kuredu and several other resort islands.

Ali Waheed, the tourism minister of the country, said the two individuals had been quarantined.

“The period for the temporary restrictions will be decided by the medical teams. Right now, we have identified people who were in contact with the patients and they are in self-isolation along with secondary contacts. At this time we can say that these individuals will be monitored for 14 days,” he added.

The Maldives had already suspended direct air links with China, the epicenter of the virus.