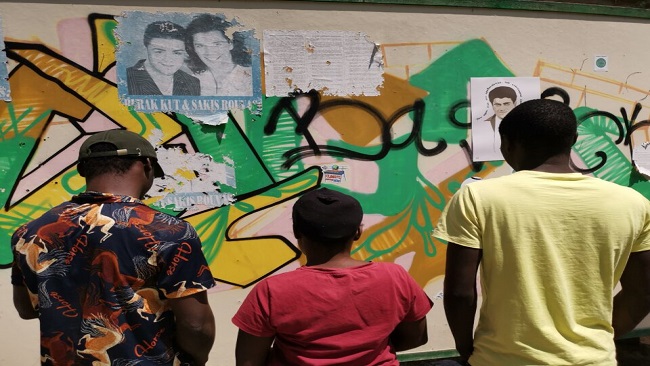 Looking for a new beginning, a trio from Cameroon jumped from the Venetian walls into what they thought was Nicosia. They remain stuck in the buffer zone six weeks later

Three young Cameroonian asylum seekers stranded in the buffer zone near the Ledra Palace since the end of May say they have been repeatedly denied access to the asylum services of the Republic.

Grace, Daniel and Emil jumped down from the Venetian Walls in the Arab Ahmet district of north Nicosia’s old town into the buffer zone at around midnight on May 24.

New to Nicosia and not fully aware of the Green Line’s configuration, the Cameroonians thought their leap would land them directly in the southern part of the divided capital. Instead they found themselves in the middle of no-man’s land when, minutes later, they were approached by an Unficyp patrol.

“The Cameroonians were first approached by the Unficyp patrol at midnight, on May 24,” said Public Information Officer of the UNHCR’s Cyprus office Emilia Strovolidou, which has been trying to negotiate the marooned trio’s future with the authorities here ever since.

“Unficyp approached the police [on their behalf] but they were refused access to the asylum procedures. Since then they remain stranded in the buffer zone, without access to the reception conditions, including food and water. We have been providing immediate assistance to them but they are in a precarious situation. They live in one tent and there is not enough space there so some of them have to sleep outside; the weather and sanitary conditions are dire.”

All three are from Anglophone Cameroon, which has been in the grips of fighting since 2017 as rebels try to break away from the predominantly Francophone government. More than 3,500 people have died and 700,000 have been displaced in the violence.

Thirty-three-year-old Emil deserted the army late last year. He told the Sunday Mail that as an Anglophone he could no longer accept the military’s actions against his fellow citizens.

Grace, aged 23, came to the north in February. She left Cameroon after her foster parents died in an accident and the uncle with whom she then went to live started abusing her sexually.

Daniel, aged 20, was approached by the Amba Fighters. He refused to join the militia group.

“My life was in danger. My parents arranged for me to come to study here. I came in March but I quickly realised there was no work. I had to start looking for a better solution.”

Strovolidou points out that it is a universal human right to seek asylum.

“These three persons presented themselves and asked for asylum, thus access to the asylum process and reception conditions provided by law must be ensured,” she said.

When she visited the island in April, the UNHCR’s Assistant High Commissioner for Protection Gillian Triggs was assured that asylum seekers “will be allowed access to the national asylum procedures.” UNHCR had previously received reports of pushbacks at sea and incidents of asylum-seekers stranded in the buffer zone.

Asked by the Sunday Mail why the Cameroonians had not been granted their rightful access to asylum procedures, the interior ministry insisted that Cyprus adheres to its duty of care for asyslum seekers but noted that when over 70 per cent of the migrant influx involves arrivals from Turkey by boat or crossings from areas where the RoC cannot exercise effective control, force majeure prevails. Cyprus, it maintained, cannot host any additional persons due to the severe burden put upon in the reception system.

The alternative, the ministry suggests, is that the European Union should create a re-allocation programme similar to that functioning in Greece.

The ministry has informed the EU Commission officially that “we stand ready to provide for the transfer of any persons to other member states.” The authorities now await a response from the Commission as to whether it is possible to relocate the Cameroonians accordingly.

European Commission sources confirm the receipt of the ministry’s letters but say that no mention was made of the specific case of the Cameroonians .

In the meantime the trio say they are determined to stay in the buffer zone until they are allowed to apply for asylum.

“It wasn’t our plan to get stuck here but what else can we do? By jumping this wall, we broke the law in the north. If we go back there we could go to prison and get deported. What we need is a new beginning. And freedom.”