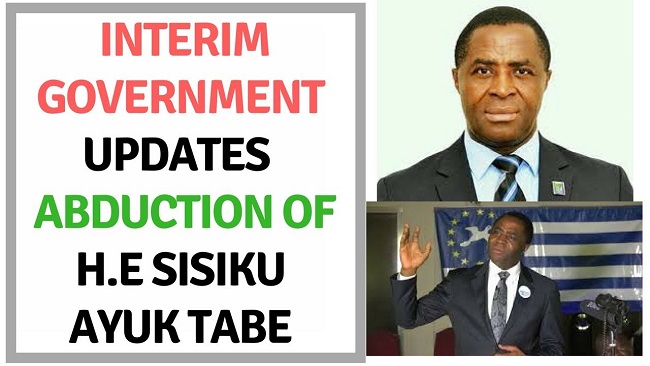 Defending the critical symbols of Ambazonia quest for freedom 0

The formation of the Interim Government rallied, reassured and refocused the struggle of oppressed people of Ambazonia for independence. With this appropriate leadership under His Excellency Sisiku Ayuk Tabe in place, the people of Ambazonia arose on September 22, 2017 in its overwhelming majority to express an irrevocable determination to proclaim its independence on October 1, 2017.  History has recorded that His Excellency President Sisiku Ayuk Tabe oversaw the realisation of Southern Cameroons/Ambazonia 57 years old dream. For this reason, he is a strong symbol of the liberation and independence of Southern Cameroons/Ambazonia. Because he is a symbol of liberation, independence and freedom, the people of Ambazonia are determined to fight to the last man to free him from the captivity of French Cameroun.

The mission to fight and liberate the President, members of the Interim Government and thousands of Ambazonian’s in captivity began with the historic mission to Nigeria by Hon Chris Anu. From the Nigerian capital, he dared the opponents of Ambazonia and put them on notice that nothing will dampen the resolve of a determined people to fight till the last person standing to free the leaders of Ambazonia and the totality of the Federal Republic of Ambazonia.  That mandate and the mission must continue until the liberation of Sisiku Ayuk Tabe is attained.

It is a matter of profound regret that some power mongers who contested the leadership of Sisiku Ayuk Tabe and the Interim Government and have evinced every possible determination to derail and sabotage the IG and the liberation struggle, are up in arms organising all forms of dubious platforms to sabotage the IG and the peoples’ liberation agenda. Cameroon Concord News Group calls on the sovereign people of the Southern Cameroons/Ambazonia to stand on their way.

Ambazonians have resolutely sacrificed, toiled for these 57 years to liberate and re-establish their capital in Buea, with its mythical glory in freedom and democratic governance.  History has recorded that it was during the mass movement to Buea to raise the flag of sovereignty and freedom on October 1, 2017, that French Cameroun unleashed bombs on armless Ambazonia civilians with helicopter gunships killing hundreds and maiming thousands.

Cameroon Concord News Group considers it a matter of grave concern for Cho Ayaba to trivialize the sacrifices, the blood, the aspirations and will of the sovereign people of the Southern Cameroons/Ambazonia by daring to propagate the idea of the relocation of the capital of the Southern Cameroons/Ambazonia from Buea to another location in Ambazonia. If this were realised (God forbids!), it will tantamount to delivering this symbol of Ambazonian sovereignty and liberation to the enemy on a platter of 30 silvers.  The only person who would not shy away from contemplating this treachery was Iscariot. Since there was only one known Iscariot, Southern Cameroons/ Ambazonia should not tolerate the floating of this provocative idea by Iscariot’s surrogates lest it corrupts the gullible.

Being the symbol of freedom and sovereignty, the courageous self-defence freedom forces of Ambazonia are right to embark on the mission to liberate Buea, the capital of the Federal Republic of Ambazonia for this generation and generations unborn. As a state symbol of freedom and sovereignty, Buea will never ever lose its significance nor lose its symbolic relevance. It is a historical truth even to the jaundiced eye, that Buea is the internationally recognized capital of the Southern Cameroons. Only an agent of the enemy will dispute or seek to distort this fact. It is regrettable that the insane idea of relocating the capital from Buea is being fostered now to distract the attention of the people of Ambazonia from the county by county grassroots contributions to the Ambazonia self-defence war effort.

Cameroon Concord News Group questions the patriotism and motivations of individuals or groups that have refused to make financial contributions for Ground Zero self-defence operations, Ambazonia refugees, the treasury of Ambazonia, key diplomatic efforts and the ABC television network to facilitate communication between the IG and the people as well as the international community. It is regrettable that some of these individuals are persistently campaigning to sabotage the IG and the people’s quest for freedom.

Milan Atam the SCCOOP leader, has not contributed to any of the liberation struggle in any of the above key areas.  He has publicly stated that his aim is to take power by any means possible and subvert the Interim Government of the Federal Republic of Ambazonia. On occasion, he has boasted how he more than anyone in this struggle holds the key to the diplomatic community. Persons who may be bamboozled by this boastful self-glorification, are ignorant of the fact that there may be highly regarded and well connected Ambazonians in this struggle who may be working around the cloak to scale diplomatic barriers to get the much-needed attention and action in this case.  True achievers have no reason to rely on self-seeking  boasting or seek to tantalize the gullible with claims to influence in high places  and wealth to justify their claims to power through deceit rather than seeking power on the basis of their proven record of support to our refugees, the legal fund for the defence of the President and the self-defence war of liberation and Ground Zero operations to attain the objectives.

Cho Ayaba used demagogy and rhetoric to dazzle and confound gullible Ambazonians. He falsely raised the hopes that he alone possessed the military prowess to confront the enemy, liberate Ambazonians and protect the people.  A majority of Ambazonians, including the President His Excellency Sisiku Ayuk Tabe and members of the Interim Government under him, fell for that costly deceit despite the persistent warnings by Cameroon Concord News Group. On September 22, 2017 and October 1, 2017, the civilian population of Ambazonia that spontaneously mobilized in their millions to proclaim their sovereignty were attacked and hundreds were slaughtered in cold blood by the enemy and thousands abducted and carried into captivity. It is surprising that power ambitions of this individual is supported by some so-called activists and individual despite the calamitous slaughter on October 1, 2017 and his propensity to direct his guns against Ambazonia self-defence forces as opposed to the enemy.

He has caused his surrogates and activists to display sophisticated weapons sourced from social media and elsewhere as weapons distributed to his fighting forces in Ground Zero without evidence of a single battle against French Cameroun terrorist army. Like one crooked Nsoh Foncham before, some gullible activists have been quick to point to these pictures on social media as the wining AK 47 armoury.  These publicity stunts are aimed at raising money for self on the backs of the suffering masses.  A well-documented record of killing GZ fighters by Cho Ayaba’s forces do not match professed liberation claims propagated by him and his activists.

Cameroon Concord News Group strongly advises citizens of the Federal Republic of Ambazonia to support ground zero self-defence war efforts.  Support for the Interim Government, contributions to the treasury and ABC television network as well as contributing for the wellbeing of Ambazonia refugees and internally displaced, the legal defence fund for the President His Excellency Sisiku Ayuk Tabe, members of the Interim Government in captivity and hundreds of thousands of Ambazonia citizens illegally held captive in French Cameroun’s concentration camps are a litmus test for patriotism and recognition.   Failing this, citizens of the Southern Cameroons/Ambazonia should beware of cunny individuals who are in this struggle to enrich themselves or for self-aggrandisement. Lest we forget, French Cameroun has the mineral and natural resources of the Southern Cameroons/Ambazonia which it steals to use to corrupt everywhere, including some Ambazonians but the overwhelming majority of Ambazonians have but the love for the Ambazonia fatherland and the personal sacrifices and contributions they are making to recover their territory and their dignity.   With more determination and support, Ambazonia will cease to be French Cameroun’s Alibaba treasured paradise. It will be liberated soon through the contributions and support of its determined citizens.