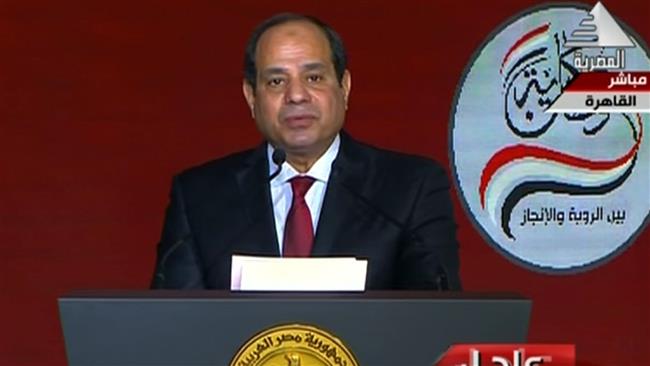 Egypt: President Sisi to stand for re-election in March vote 0

Egypt’s President Abdel Fattah el-Sisi has announced that he will stand for re-election in the presidential vote due to be held in March.

“I announce to you in the honesty and transparency which we are used to… my candidacy for the post of president of the republic,” Sisi said at a Cairo conference broadcast live on state television on Friday.

Sisi came to power as president in June 2014 after winning a landslide victory in the presidential election held a month earlier with securing nearly 97 percent of the vote. In July 2013, he led a military coup against Mohamed Morsi — Egypt’s first democratically-elected president after the fall of former dictator Hosni Mubarak in 2011 — that led to Morsi’s ouster and imprisonment.

The presidential election is scheduled to be held on March 26-28, with candidates required to submit all necessary papers to Egypt’s National Elections Authority between 20 and 29 January.

Who else will stand?

Sisi is widely expected to win in the first round of the vote, particularly after two prominent potential candidates announced that they would not take part in the poll. His main challenger former premier Ahmed Shafiq, who had declared his candidacy last month, said he would not run in the election.

On Monday, Mohamed Anwar Sadat, a dissident and nephew of Egypt’s late president of the same name, also announced that he would not run in the election, citing a climate of fear surrounding the vote.

However, the former armed forces chief of staff, General Sami Anan, said in a video posted on his official Facebook page that he would run for president to “save” Egypt from “incorrect policies,” and called on state institutions to preserve neutrality toward all candidates.

“I call on civilian and military institutions to maintain neutrality towards everyone who had announced their intention to run and not take unconstitutional sides of a president who will leave his post in a few months,” Anan said.

Sisi, however, warned on Friday that he would not allow “corrupt” people to run for president.

Sisi’s administration has been tough on followers of the Muslim Brotherhood, the most prominent political party in Egypt which is now outlawed. Many members of the party, including Morsi, have been given harsh sentences while tens of thousands have been arrested awaiting trial.

The crackdown on the Brotherhood has sparked widespread outrage around the world as rights campaigners and governments keep criticizing the Sisi administration for the collective imprisonment of the party members.