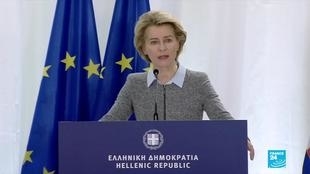 European Commission President Ursula von der Leyen said the EU would provide Greece with “all the support needed” as it struggles with an influx of migrants allowed to cross from neighbouring Turkey after Turkish President Recep Tayyip Erdogan warned that “millions” of migrants would soon head for Europe.

EU chiefs on Tuesday pledged millions of euros of financial assistance to Greece to help tackle the migration surge from neighbouring Turkey, warning against those wishing to “test Europe’s unity”.

Flying by helicopter over the Greek-Turkish border, where thousands of desperate asylum-seekers have tried to break through for days, European Commission President Ursula von der Leyen said the bloc would provide Greece “all the support needed”.

“Those who seek to test Europe’s unity will be disappointed,” von der Leyen said, standing alongside Greek Prime Minister Kyriakos Mitsotakis and the chiefs of the European Council and European Parliament.

“We will hold the line and our unity will prevail.”

The European Commission president said the bloc would provide 700 million euros ($777 million), half of it immediately, to help manage the migrant situation.

In addition, the EU border agency Frontex will deploy a rapid intervention team including an additional 100 guards backed by coastal patrol vessels, helicopters and vehicles, she said.

“Our first priority is making sure that order is maintained at the Greek external border, which is also the European border,” von der Leyen told journalists.

“I am fully committed to mobilising all the necessary operational support to the Greek authorities,” she said, adding that Greece was acting as a “shield” for Europe.

Over 500 Frontex guards were currently deployed, and Greece could also receive assistance in medical teams, mobile shelters, tents and blankets, she said.

Von der Leyen insisted that “Turkey is not an enemy” but added: “people are not just means to reach a goal.”

Earlier, Mitsotakis announced that Greek border forces had averted “over 24,000 attempts at illegal entry” by land and sea, making dozens of arrests.

“Europe has not been up to the task of dealing with the migration crisis,” he said.

“I hope this crisis will serve as a wake-up call for everyone to assume their responsibilities.”

The UN refugee agency has roughly estimated that there are now some 20,000 migrants massed across the 200-kilometre (125-mile) border with Turkey.

“This is a very rough assessment because the movement is continuous towards different sides,” said Stella Nanou, the UNHCR Representative in Greece.

Amid claims on the Turkish side that Greek security forces are shooting near migrants, European Council President Charles Michel said it was “crucial to act in a proportionate manner and to show respect for human dignity and international law”.

Greece has vehemently denied the allegations.

“No shots have been fired by Greek border forces against any individuals attempting to enter Greece illegally,” said government spokesman Stelios Petsas.

Several aid groups on the Aegean island of Lesbos said Tuesday they were suspending work with refugees and evacuating personnel after attacks on staff.

“Once night falls, there are non-stop attacks on NGOs, on workers, on people who are here as volunteers,” said Douglas Herman, co-founder of the organisation Refocus.

“Most of those organisations right now have started to suspend their operations, some indefinitely,” he told AFP.

At the Greek border crossing of Kastanies, AFP reporters saw soldiers boarding migrants onto military vehicles. Other unmarked vans were also picking up migrants wandering on the streets.

Thousands have arrived at the frontier since President Recep Tayyip Erdogan announced last week that it would no longer stop them trying to enter Europe.

Athens has suspended asylum applications, and Mitsotakis on Tuesday said it was “painfully clear” that Turkey “has systematically encouraged and assisted tens of thousands of refugees and migrants to illegally enter Greece.”

“This is no longer a refugee problem. It is a blatant attempt by Turkey to use desperate people to promote its geopolitical agenda,” the Greek PM said.

European leaders have insisted Turkey abide by a 2016 deal to stop migrant departures in exchange for six billion euros in assistance.

Some Syrians have accused Turkish troops of pushing them across the frontier.

Von der Leyen said she had “compassion for the migrants that have been lured through false promises into this desperate situation.”

Turkey already hosts some four million refugees and faces another huge influx from Syria where the regime, backed by Russian air power, is pressing a violent offensive to retake the last rebel-held province of Idlib.