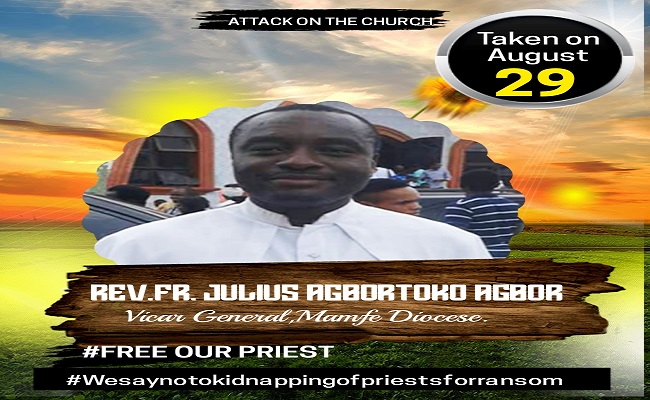 Father Julius Agbortoko must be released! 0

News that a catholic priest in Mamfe has been kidnapped by Amba fighters is no good news even to the fighters themselves as it calls into question the credibility of the fighters and the purpose of the insurgency.

This act committed by a few misguided and gun-toting men of the underworld is irresponsible and should be condemned by every sound-minded Cameroonian.

It should be recalled that the Catholic Church as a religious institution has been calling for an end to the conflict and a fast reconciliation in the country.

The Catholic Church has for centuries been an agent of peace and development in West Cameroon and those who have kidnapped the Man of God must know that they have crossed the reddest of the red lines and this is a monumental error that will haunt them for the rest of their lives.

Father Julius Agbortoko must be released forthwith, if not, the consequences of such recklessness will kick in sooner rather than later.

In 2018 he was appointed Vicar General of the Diocese of Mamfe, a position he has occupied till his abduction yesterday August 29, 2021.