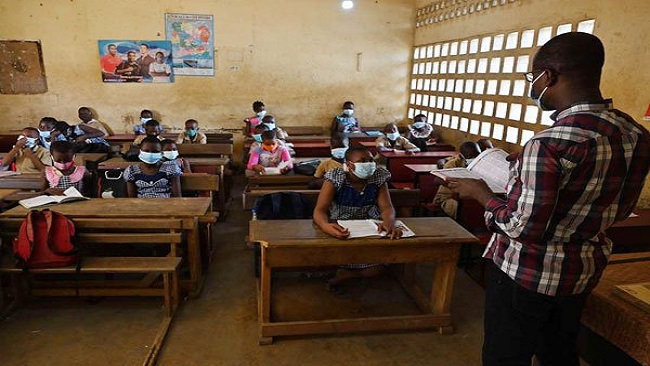 Cameroon’s medical authorities say over 200,000 children have not received routine vaccinations on schedule since March, when the country had its first case of COVID-19.  Parents are refusing to take their kids to hospitals because they fear they may be infected with the virus, which has spread to nearly 17,000 people and caused nearly 400 deaths.  Doctors are warning that without the vaccinations, children in Cameroon risk preventable diseases such as diphtheria, the measles, and tetanus.

A 4-month-old baby cries as she receives her second polio vaccine at the Chantal Biya Foundation Hospital in Cameroon’s capital Yaounde.

Elizabeth Mbungong, 27, says she is getting her baby’s booster shot nearly three months late because she was scared of going to the hospital during the COVID-19 pandemic.

“I gave birth in the month of March and the first vaccine was given to the baby against Tetanus. They gave me another rendezvous [appointment] in the month of April. I did not respect [the appointment] because I was afraid of the coronavirus,” she said.

Mbungong said after she watched a TV program on the dangers of not vaccinating children, she decided that going to the hospital was worth the risk.

Pediatrician Clemence Vougmo says many parents are letting fear of the virus prevent them from getting their children vaccinated.

She says Chantal Biya Foundation Hospital should have had 2,300 children for routine vaccinations since March. But they have seen only about half the children.

Cameroon’s medical officials say the problem has been widespread during the pandemic.

Cameroon’s National Expanded Program for Immunization reports across the country at least 200,000 children have not received their vaccinations as scheduled.

Deputy permanent secretary of the program Shalom Tchokfe says they have deployed staff to look for the children.

Speaking via telephone from Douala, a coastal city and the largest in Cameroon, he said the situation is especially troubling in the capital Yaounde, the economic hub Douala, and the western town of Bafoussam. He said 110,000 children in those cities have not received their routine vaccines since the month of March, when Cameroon reported its first case of COVID-19. Teams can meet the children in their houses, said Tchokfe. Parents and health workers are safe during routine vaccinations at hospitals, he said, as long as they wear their masks and wash their hands regularly.

Tchokfe notes that vaccinations dramatically reduce child mortality and urges all parents to get their infants vaccinated on schedule.

The United Nations warned this month of an alarming decline in the number of children getting vaccinated for preventable diseases such as diphtheria, tetanus, and the measles.

According to a study published by the Lancet Global Health Journal this month, continuing with routine immunizations may lead to 8,300 additional deaths in Africa from COVID-19.

But the study said suspending vaccinations could lead to a further 702,000 African children dying from preventable diseases.