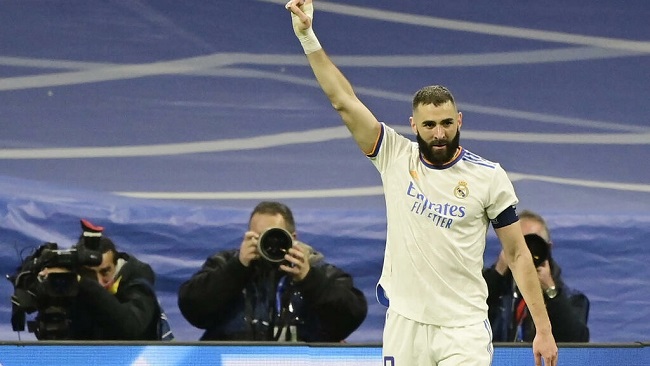 Real Madrid pulled off one of the great Champions League comebacks on Wednesday as Karim Benzema scored a breath-taking hat-trick to upstage Kylian Mbappe and dump Paris Saint-Germain out in the last 16.

Madrid were set to be the latest victims of another Mbappe masterclass at the Santiago Bernabeu after the 23-year-old ran them ragged for the best part of an hour and fired in to put PSG 1-0 up on the night, 2-0 ahead on aggregate.

But Madrid came storming back as Benzema capitalised on a mistake by PSG goalkeeper Gianluigi Donnarumma and then scored an incredible double in two minutes, the third coming just eight seconds after PSG had kicked off.

When the full-time whistle confirmed their 3-2 aggregate victory, many of Madrid’s players dropped to their knees and looked up to the sky, as much perhaps in disbelief as joy, after completing one of the most memorable turnarounds in the club’s recent history.

All eyes were on Mbappe, who was the only player to be cheered by Madrid’s fans before the game as they were gifted an up-close preview of the player they hope will be theirs this summer.

Mbappe delivered, scoring a superb goal, not to mention a spellbinding second that was disallowed for offside when he bamboozled Thibaut Courtois with a magical dummy-finish.

To think he might not even have been 100 per cent here after a knock in training on Monday temporarily put his involvement in doubt.

But what looked set to become an exhibition of the world’s deadliest player instead became another remarkable European night for Real Madrid, who showed again why they consider this to be their competition.

Madrid clearly wanted to hit PSG hard form the start, with Dani Carvajal leaping and waving his hands at the crowd in an attempt to generate a wave of noise.

For a while, it worked, Vinicius Junior tearing down the left and Fede Valverde bulldozing through Mbappe, but the surge was brief. PSG killed Madrid’s momentum, pushed them back and took complete control.

Mbappe sped clear for the first time in the eighth minute, Neymar curling a ball into the space on the left. The stadium held its breath, Mbappe made space but this time hit Courtois.

Madrid dropped off but ceded control. Mbappe nipped past Eder Militao and Courtois saved. A lovely interchange between Lionel Messi and Marco Verratti gave Neymar a sight of goal but Courtois was there again.

PSG were comfortable now, dictating the play and sensing the trepidation. Madrid had openings, Benzema curling just wide, but all over the pitch they looked slower, heavier, more cumbersome.

Messi skipped through and scooped wide before Mbappe had his first of two goals ruled out, driving into the corner only to see the flag raised.

The goal, though, felt inevitable and in the 39th minute, it came. Carvajal lost the ball upfield and with Madrid committed, Neymar arced another brilliant pass over the top.

By the time he reached it, Mbappe only had David Alaba in front of him and as he shaped to bend into the far corner he instead fired early, whipping a deadly shot past Courtois and inside the near post.

Madrid tried to reset at half-time but Mbappe carried on where he left off with a brilliant, but disallowed, goal.

He fooled Courtois with an astonishing dummy shot, beating the Belgian without even touching the ball and slammed in. The flag went up but the stadium was astounded.

The game was becoming less a contest, more an Mbappe exhibition but then Benzema, out of nowhere, dragged Madrid back into the tie.

He chased Nuno Mendes’ backpass to Donnarumma, who skewed under pressure. Vinicius was able to collect and cut back to Benzema, who slotted home.

Suddenly, there was hope again, the crowd on their feet roaring Madrid on. Vinicius shot over when the ball cannoned kindly to him in the box. Luka Modric tracked Messi and slid him into touch.

It was Modric who inspired Madrid’s second too, a scintillating run through midfield allowing Vinicius to race clear down the left. He scooped back inside to Modric, whose exquisite reverse pass found Benzema, who finished.

Madrid were level on aggregate, the goal confirmed after a check from VAR. Then eight seconds later, incredibly, they were ahead. PSG squandered possession from kick-off, Rodrygo released Vinicius and Marquinhos’ attempted clearance found Benzema, who steered into the corner.

“This is how Madrid win,” the fans began to sing. They fell quiet when Messi stood over a free-kick in injury time but the ball curled over and the cheers began again.