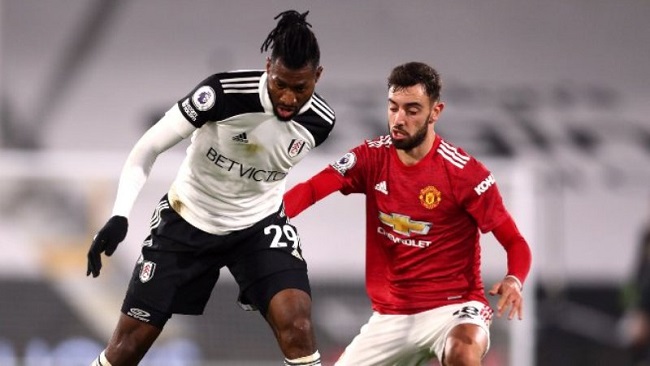 There has been intense speculation surrounding the future of Anguissa in the last period.

The reports in England suggested that Everton are linked with surprise move for Fulham midfielder Andre-Frank Zambo Anguissa.

The 25-year-old has been subject to interest from various European clubs.

The Cameroon international joined Fulham from Marseille for a fee in the region of 24.85 million euros in August 2018. His contract expires in the summer of 2023.

The midfielder has provided three assists in 34 matches this term on all fronts.

Andre-Frank Zambo Anguissa has also left his mark at the international stage after netting three goals in 26 senior appearances for the Cameroon national team.

His performances have seen him become the target of many European clubs including Everton.

The report details that Carlo Ancelotti feels his midfield currently lacks some bite and that he could strengthen this summer.

Ancelotti is a firm fan of Fulham midfielder and Everton could make a move for the player if the financial aspect makes sense.

The Toffees are desperate to make an impact in the summer transfer window.

The Cameroon international will offer the Everton boss the freedom to be more flexible with his formations, tactics and team selections.

According to the report, “Everton are chasing Fulham midfielder Andre-Frank Zambo Anguissa for the summer market. Calciomercato reports Everton are lining up move for Zambo Anguissa. The Cameroon international has been ever-present for Scott Parker’s side this season, playing in 30 of their 34 Premier League games.”

If Everton can agree on a fee with Fulham, the deal should be easy to complete. Fulham are preparing to sell their midfielder should they receive right offer for him.

Andre-Frank Zambo Anguissa ideal fit for Everton? If Anguissa is available for the right price, then he could be a clever acquisition for Everton.

The Premier League side need to add more depth to their midfield and the 25-year-old would be a good signing.

Andre-Frank Zambo Anguissa has all the skillset required to be a success story at Everton. Therefore, it makes sense for Ancelotti to step up his attempts to bring the Cameroon midfielder to Everton.

It will be interesting to see if the Toffees can beat their rivals to the midfielder’s signature.