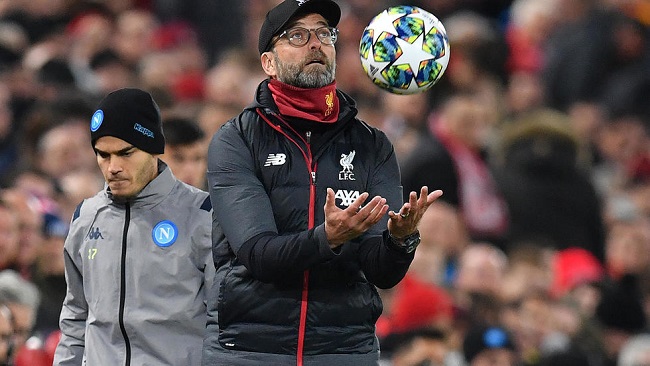 Football: Klopp doesn’t care about Christmas No. 1 spot for Liverpool 0

Jurgen Klopp says he does not care about being top of the Premier League at Christmas as he prepares his Liverpool team for a hectic few weeks.

Liverpool, who finished a single point behind champions Manchester City last season, travel to Bournemouth on Saturday with an eight-point lead over Leicester. City are a further three points adrift.

A win on the south coast would mean Liverpool cannot be caught before December 25.

Only three times in the past 11 years has the top-placed team at Christmas failed to go on to win the title — and on every occasion it was Liverpool, including last year.

Klopp, targeting Liverpool’s first English top-flight title for 30 years, said he was not interested in such numbers.

“I don’t listen to (any) of them, to be honest. So I’m completely fine. We want to try and win at Bournemouth.

“What that means for Christmas, I never thought about. So it’s not really interesting. We know that we are in a really, really difficult situation with the games coming up.

“We know that but we accepted that a long ago. But now we have to deal with it and we are really positive in this moment but we need to be lucky with the players that they stay fit and healthy.”

The European champions face 10 matches between Saturday’s game at Bournemouth and their FA Cup tie against Everton on January 5, including two within 24 hours in the League Cup and Club World Cup, for which Liverpool will use two squads.

Klopp’s much-changed team coasted to a 5-2 win over Everton at Anfield on Wednesday, with rarely used Belgian striker Divock Origi scoring twice and Xherdan Shaqiri once to underline the depth of resources at the German manager’s disposal.

“Very often we used three other players up front, but Div was always so important for us and it’s really nice that he can show his importance as well in a game like this,” he said.

The Liverpool manager was asked whether he would follow a similar template to last December, when he made multiple changes to cope with a busy calendar.

He said: “It was not a plan last year to make 30 changes… but it’s a time where you have to make changes, that’s clear. It’s not a specific number. It’s just the need of the situation and that’s what we will do, 100 percent.

“I know when you are a football supporter then you want to play in your mind the best 11 all the time but it’s not FIFA or PlayStation where they don’t need a rest.”