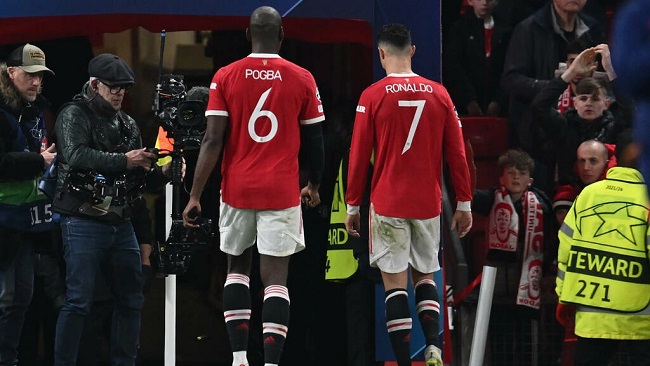 Manchester United were established members of Europe’s elite a decade ago but they have been reduced to the status of also-rans in the Premier League and even in their own city.

Under Alex Ferguson, the club reached three Champions League finals in four years from 2008 to 2011. Since then they have won a meagre two knockout ties in the competition.

United’s limp 1-0 defeat against Atletico Madrid on Tuesday consigned them to a fifth consecutive trophyless season and suggested they are as far as ever from finding the key to success.

A return to the Champions League next year looks highly unlikely, with Arsenal in pole position to grab fourth spot in the Premier League after a strong run under Mikel Arteta.

United, who drew 1-1 against Atletico in the first leg in Spain, started brightly at Old Trafford but were let down by familiar defensive lapses and a palpable lack of a cutting edge.

Cristiano Ronaldo did not have a shot on goal while substitutes Edinson Cavani, Paul Pogba and Marcus Rashford failed to make an impact against Diego Simeone’s well-drilled side.

Former United goalkeeper Peter Schmeichel, who won a famous Treble under Ferguson in 1999, said United must do better but believes their current mess is an opportunity for root-and-branch reform.

“For a club that professes to be one of the biggest in the world, we have to do better than that,” he told the BBC.

“It’s been a long period of not being great and it’s very disappointing. But it’s also a time of opportunity and one we cannot miss.

“The club is under different leadership and wants to move in a different direction. It’s a chance to restructure the whole football department — how we recruit, how we scout, how we educate.”

Richard Arnold is the new man at the helm at Old Trafford after taking over from Ed Woodward as the club’s most senior executive.

The chief executive has the unenviable task of finding a new manager — United’s fifth permanent boss since the departure of Ferguson as a Premier League champion in 2013.

Schmeichel said despite the malaise at Old Trafford, the best managers in the world would “relish” the chance of replacing interim boss Ralf Rangnick at the end of the season.

“They will see great potential here,” he said. “If they are the person to get it right, we’ve seen what that means. I think anyone who is not at Manchester City or Liverpool would take that opportunity if it was offered.”

Paris Saint-Germain manager Mauricio Pochettino and Ajax’s Erik ten Hag are both among the favourites to be the next manager even though their clubs also exited at the last 16 stage of the Champions League.

Chelsea’s Thomas Tuchel has been linked with the job because of the current turmoil at the Stamford Bridge club following the sanctioning of Russian owner Roman Abramovich over the Ukraine war.

Former midfielder Paul Scholes, who was part of Ferguson’s all-conquering side, said United needed to find an elite manager who “strikes fear into players”.

“This isn’t a terrible group of players,” he said on BT Sport. “I think if you give this group of players a structure and way of playing, there’s some real talent in the squad.

“Maybe they need a manager that they are going to be afraid of and that will scare them into performances.”

The problem facing United’s hierarchy is that there have been a number of chances to reset and rebuild since Ferguson brought down the curtain on the most successful spell in the club’s history.

United have not mounted a serious title challenge for nearly a decade, watching enviously as Manchester City and Liverpool have set standards they have been unable to match despite a huge outlay on players.

Few would bet that this time they will get it right.