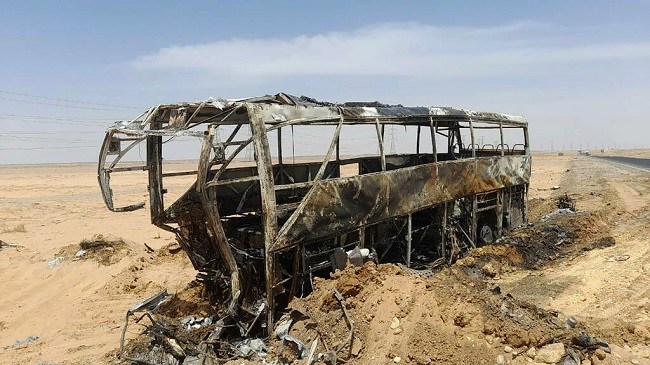 Four French, one Belgian among 10 dead in Egypt bus crash 0

Four French tourists and one Belgian were among 10 people killed in a bus crash Wednesday in Egypt, whose travel industry is only just emerging from years of political upheaval and the Covid-19 pandemic.

Fourteen others — eight French and six Belgians — were taken to hospital with “broken bones, bruises and superficial injuries” but all were in a stable condition, the governor of the southern province of Aswan said.

The other five people killed were all Egyptian — the bus driver, his assistant and the tour guide, as well as two people in the other vehicle, a statement from the public prosecution said.

The Belgian foreign ministry confirmed to AFP that one of its citizens died and others were injured.

The accident occurred early Wednesday morning when the bus collided with a pick-up as it was transporting the tourists on the 300 kilometre (186 mile) road journey between Aswan and the famed Abu Simbel temple further south.

An AFP photographer saw what remained of the burnt-out vehicles lying by the roadside.

The prosecution ordered an “urgent investigation” to determine “the cause and circumstances of the accident and those responsible”.

Crashes are relatively common in Egypt, where many roads are in disrepair and traffic regulations frequently ignored.

Some 7,000 people died in road accidents in the country in 2020, according to official figures.

The Abu Simbel temple was moved from its original location in the 1960s under the rule of president Gamal Abdel Nasser to make way for the construction of the Aswan High Dam.

Egypt had begun reviving its vital tourism industry by promoting its ancient heritage, after the country’s 2011 revolution and ensuing unrest struck the sector.

But the arrival of the Covid-19 pandemic in 2020 and the subsequent global travel bans resulted in a plunge in tourism revenues to $4 billion, from $13 billion the previous year.

The sector employs some two million people in a country of 103 million and generates more than 10 percent of GDP.

In August 2021 Russia resumed flights to Egyptian resorts, six years after a Russian airliner crashed after taking off from Sharm el-Sheikh, killing all 224 people on board.

But Russia’s invasion of Ukraine has yet again cut off much of the flow of tourists to Egypt, as the two countries accounted for about 40 percent of visitors prior to the war.

The current administration of President Abdel Fattah al-Sisi has invested heavily in promoting tourism, and has organised major events in a bid to attract visitors.

Last year, the North African country staged a procession of floats carrying the mummified remains of 22 pharaohs, including Egypt’s most powerful ancient queen, to a new resting place in Cairo.

Since the start of April, visitors from dozens of additional countries have been permitted to obtain visas on arrival to Egypt, rather than applying in advance.

While attacks on tourists have largely ceased since they peaked in the 1990s, deadly incidents have occurred.

And in February 2019, a German woman and two Egyptian children were killed when a building collapsed in a residential neighbourhood of the southern city of Luxor.