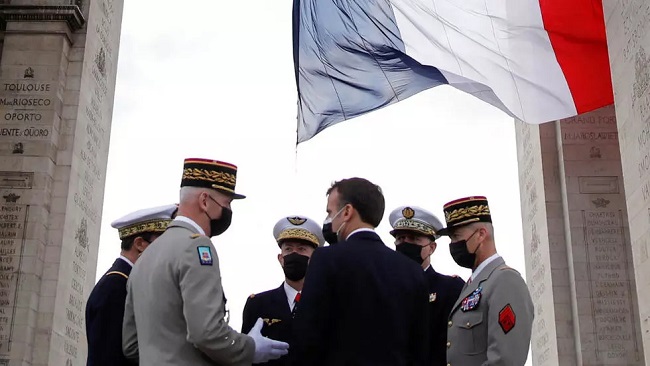 The French army’s chief of staff on Tuesday called on a group of soldiers who signed an open letter warning about the risk of “civil war” in France to quit the armed forces.

“The most reasonable step is certainly to leave the institution in order to freely express their ideas and convictions,” General Francois Lecountre said in a letter to military personnel that contained no threat of sanctions.

The letter by the soldiers had warned of unrest in the country because of what they called “concessions” to Islamism by French President Emmanuel Macron.

The document, posted on the website of the right-wing Valeurs Actuelles magazine late Sunday, echoes a letter published by the same publication last month but appears to have been written by an unknown number of younger troops still in active service.

“Over the past several weeks …, the obligation of discretion for members of the armed services has been largely violated,” Lecointre said in his message.

He said those who had signed the letter “in order to defend personal convictions” had dragged the army into political debates it should steer clear of.

“Every soldiers enjoys freedom of thought but must unambiguously distinguish between civic and military duties,” the general added.

Those who signed the letter described themselves as soldiers from the younger generation of the military, a so-called “generation of fire” that had seen active service.

“They have offered up their lives to destroy the Islamism that you have made concessions to on our soil,” they wrote.

The latest letter as well as the previous one have prompted political uproar in France with Defence Minister Florence Parly dismissing them as part of a “crude political scheme” and reminding soldiers of their obligation of neutrality.

Last month an open letter by retired generals in Valeurs Actuelles warned Macron the country was headed for “civil war” unless he cracked down on Islamists, anarchists and anti-racism activists.

A number of serving defence force members also signed the dramatically-worded letter which warned that “laxist” policies would result in chaos requiring “the intervention of our comrades on active duty in a perilous mission of protection of our civilisational values”.

Failure to act against the “suburban hordes” — a reference to residents of the mainly immigrant tower blocks that ring French cities — and other unnamed groups who “scorn our country, its traditions and its culture” will lead to “civil war” and deaths “in the thousands”, the signatories warned.