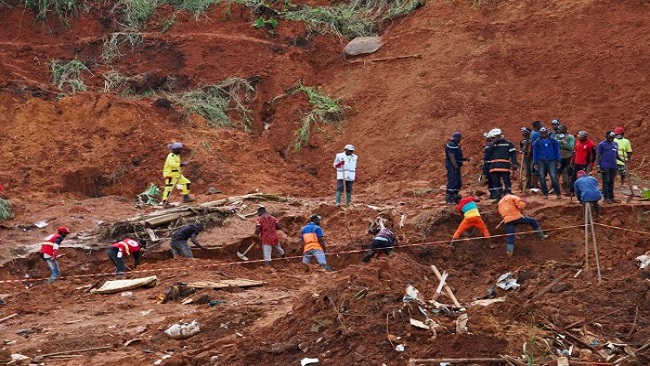 A young girl survived miraculously after she got buried by a landslide in Western Cameroon.

Her father, Tabou Victor, told CNN that the 12-year old survivor was buried on Monday night after his house collapsed due to the landslide. He recalled hearing them cry for help during the mishap. He was able to save his other children — two girls and a boy — by breaking the back door and pulling them out.

He got a bruised on his left eye and a fractured arm. His children were also severely injured, while the 18-year old daughter died in the hospital.

The landslide was triggered by torrential rain on Monday while the residents are sleeping at night.

One survivor, Albert Kenge, said that it all started around 10:00 p.m.  He first heard a loud noise and saw a huge cloud of dust. “Then, the mountain suddenly collapsed,” he told Reuters news agency.

Ever since the rescue mission has started, workers have recovered the bodies of 26 children and four pregnant women, according to the local media Cameroon Radio Television (CRTV).

The rescue mission is still going on as of Wednesday, but the recent death toll has risen to 42 people, from 37 on Tuesday.

Authorities issued an evacuation order due to the fear of more landlines to come as the rains continue.

The government had warned them…

Fonka Awa Augustine, the government of the region, said that they have warned the residents about the ground instability of the areas but people still built their houses there. The slopes in the area were making the rescue mission more difficult, Augustine added.

An inspection will be done by a delegate of the Prime Minister to evaluate the situation and decide the appropriate measures to be taken, Augustine also said.

President Paul Biya extended his condolences to the victim. “I am saddened by the death of several compatriots,” he said in a message addressed to the governor of the region.

The government also pledged to endow financial assistance on the medical bills of the eight survivors, including Victor’s family.

Even if the rainy season of Central Africa, the region is still experiencing heavy rains that caused severe flooding. At least 30,000 people Cameroon’s neighbor country, the Central Africa Republic, lost their homes.

Nearly one million South Sudanese were also affected by the flood caused by the rain that has been going since July, the United Nations reported.

And the problem will not end yet once the flood recedes due to food scarcity. For at least a month, families might not be able to support themselves due to a considerable amount of crops and livestock damage.