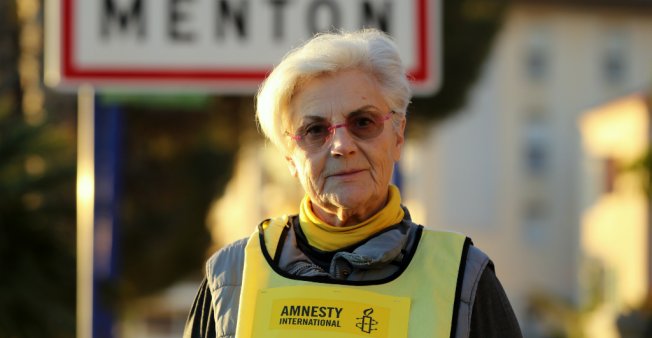 The trial of pensioner Martine Landry is the first of its kind in France involving a member of Amnesty.

It comes a day before three activists — two Swiss and one Italian — appear in court for helping a group of migrants cross from Italy to France through a pass in the Alps in April.

Landry is the coordinator of Amnesty’s refugee response in southeast France. She risks up to five years in prison and a fine of 30,000 euros ($34,700) if convicted of illegally assisting two Guinean youths in July 2017.

She is accused of helping the pair, both aged 15 according to Amnesty, cross back into France after they were arrested and returned to Italy during a raid on the home of olive farmer and activist Cedric Herrou, where they had been sheltering.

Landry claims that she did not help the teens re-enter France after they were turned back at the border by Italian police.

The white-haired campaigner said she stepped in only after they crossed onto French soil and took them to the police to register for asylum.

‘Solidarity is not a crime’

Her case, like that of the Alps campaigners, has become a cause celebre among critics of President Emmanuel Macron’s tough stance on migration.

Several dozen activists gathered outside the courthouse in the city of Nice holding banners reading “Solidarity is not a crime”.

In April, MPs voted to soften laws criminalising acts of solidarity with illegal migrants, to exempt those who provide them with free food, shelter or medical care.

Helping migrants illegally cross the border remains a crime, however.

Amnesty condemned the case against Landry.

“Dragging a compassionate pensioner before the court on these surreal charges makes a mockery of justice. Acts of solidarity should be promoted, not punished,” its senior campaigner on migration, Maria Serrano, said in a statement.

The three activists on trial Thursday in the Alpine town of Gap are accused of helping a group of migrants reach France after dozens of anti-immigrant campaigners blocked another pass on the trans-alpine migrant trail.

They face up to 10 years in prison and fines of 750,000 euros each as well being banned from France if convicted.

NGOs have contrasted the treatment of the campaigners with that of “Spiderman” Mamoudou Gassama, the illegal Malian migrant who was fast-tracked for French citizenship this week after rescuing a young boy hanging from a balcony in Paris.