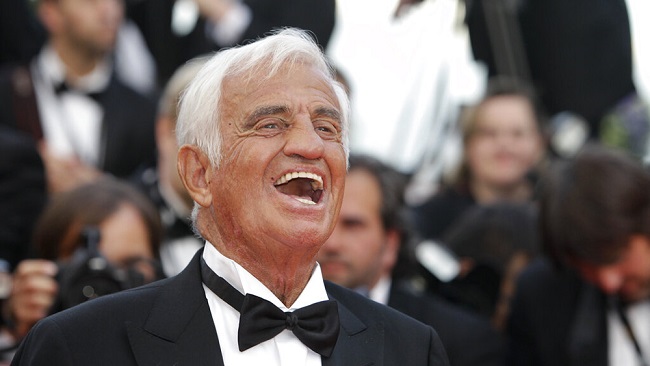 Belmondo, who has died at his Paris home aged 88, was the cool rebel of the new wave of French cinema typified in Jean-Luc Godard’s 1960 film classic, A Bout de Souffle.

His moody performance as a doomed thief and Humphrey Bogart fan struck a chord and saw him dubbed the Gallic James Dean.

Later, he forsook arts cinema to become a highly bankable commercial actor, as at home in comedy as in drama.

Jean-Paul Belmondo was born in Neuilly-sur-Seine, a suburb of Paris on 9 Apr 1933, the son of Paul Belmondo, a sculptor whose statues grace many a Parisian park.

The intensely Bohemian atmosphere of his upbringing had a formative effect on him.

He failed at school and became an amateur boxer. In his short-lived career, he won 15 of his 23 bouts before giving up to concentrate on acting.

His trademark bumpy nose, however, was a result of a fight in the school playground rather than the ring.

After performing on stage in provincial theatres, his movie break came with the role of Laszlo in Marcel Carné’s 1958 film Les Tricheurs.

On the strength of his forceful portrayal, he was given his first starring role in A Bout de Souffle.

One critic described him as “a bewitchingly ugly man.”

His cult image carried him through several action films such as Les Distractions and La Novice.

Determined not to be stereotyped, Belmondo also accepted more demanding roles such as the idealistic intellectual of Vittorio de Sica’s La Ciocara in 1961, and as the young country priest in Philippe de Broca’s swashbuckling Cartouche the following year.

By the mid-60s, he had switched completely to the commercial mainstream and formed his own production company, Cerito.

He even performed his own stunts in such films as Les Tribulations d’Un Chinois en Chine in 1965, though he gave this practice up after an accident in the 1985 film Hold-up.

He brightened many an all-star cast in international productions such as Is Paris Burning? (1966), the James Bond spoof Casino Royale (1967) and with Alain Delon in the gangster movie Borsalino (1970),

He moved away from action movies claiming that “I don’t want to be a flying grandpa of the French cinema.”

In 1987 Belmondo returned to the stage for the first time for nearly 30 years and divided his work between theatre and film for the rest of his career.

Two years later he won a Cesar, the French equivalent of an Oscar, for his performance in Itineraire d’un Enfant Gate.

He branched out creatively as part of the ensemble in Varda’s homage to international cinema Les Cent et une Nuits de Samon Cinema in 1995 and as the Jean Valjean figure in Claude Lelouche’s re-working of Les Miserables in the same year.

Jean-Paul Belmondo was divorced from his first wife Elodie in 1965. His second marriage to Constantin also failed. He later had long relationships with actresses Ursula Andress and Laura Antonelli.

Cinema audiences at home and abroad were drawn to his charm and seeming disregard for whatever absurdities were taking place on screen. He was chosen by Empire magazine as one of the 100 Sexiest Stars in film history.