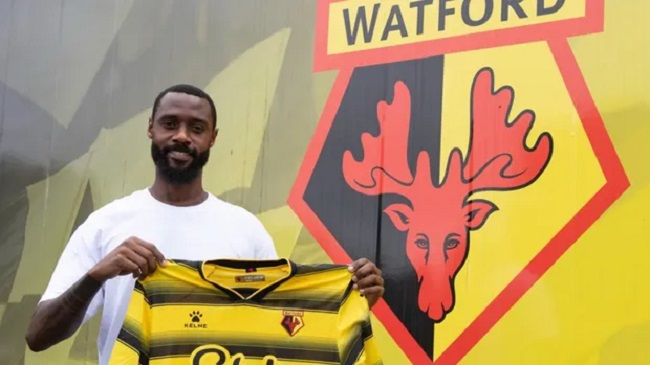 Championship side Watford have confirmed the departure of former Cameroon international Nicolas Nkoulou.

The centre defender was asked to leave following the Vicarage Road giants’ demotion to the English second-tier.

In the just-concluded season, the Hornets finished in the 19th position having garnered 23 points from 38 league outings.

Nkoulou featured in just three league appearances and he is now expected to look elsewhere to continue his professional career alongside Andre Gray, Juraj Kucka, and goalkeeper Ben Foster.

“Following the conclusion of the 2021/22 Premier League season, Watford FC can confirm that five first-team players have left the club,” a statement from the club website read.

“Defender Nicolas Nkoulou – who made three league appearances after signing in October 2021 – and forward Andre Gray – who spent the last campaign on loan at Queens Park Rangers – have also departed upon the expiration of their deals.

“We thank the departing players for their contributions and wish them the best of luck for the next steps in their careers.”

The African defender moved to England to become Claudio Ranieri’s first signing after leaving Serie A side Torino.

Prior to his spell in the Italian top-flight, Nkoulou played for AS Monaco, Olympique Marseille and Olympique Lyon.

On the international scene, Nkoulou was part of Cameroon’s squad for the 2008 Olympic Games. There, he helped the squad reach the knockout phase before they were shown the exit door by Brazil.

He made his senior team debut on November 19, 2008, in a 3-2 friendly defeat against South Africa.

Coach Paul Le Guen picked him in his squad for the 2010 Africa Cup of Nations and then the 2010 Fifa World Cup hosted by South Africa.

Following the suspension of Samuel Eto’o and Eyong Enoh from the Indomitable Lions squad for five and two matches respectively by the Cameroon Football Federation for boycotting a friendly match against Algeria, the defender was appointed as captain of Cameroon on a temporary basis and captained his first national match, in a 1–0 win over Guinea-Bissau.

Nkoulou announced his retirement from the national team after helping the country win the 2017 Afcon.