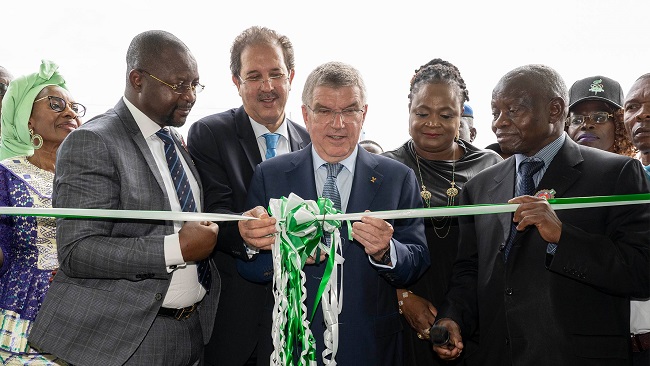 President Bach’s African tour continued with visits to Nigeria and Cameroon. It follows meeting in Cape Verde and Senegal earlier in the week.

The visit to Nigeria began in Abuja with a welcome dinner hosted by the Vice President of Nigeria, Yemi Osibanjo, who was representing the Nigerian President, who, for personal reasons, could not be present. Joined by Nigerian Olympians, President Bach was accompanied by the President of the Association of National Olympic Committees of Africa (ANOCA), Mustapha Berraf, and African IOC Members.

The following day, President Bach and his delegation attended the inauguration of the new ANOCA headquarters. He was joined by ANOCA President Berraf as well as presidents and representatives of many of the 54 African National Olympic Committees (NOCs). President Bach told them: “a new home is always a chance to look to the future. Bringing all African NOCs together under one roof is a chance to take African sport to new heights.”

Earlier, the President visited Aduive school, which puts the Olympic values at the heart of its curriculum. After meeting the pupils and seeing sports demonstrations, the President unveiled Olympic rings at the school playing fields.

Later, he had a Q&A session with Nigerian athletes, including Olympians and those hoping to qualify for the Olympic Games Tokyo 2020. The President answered a range of questions, from athlete numbers at the Olympic Games to the future of esports and egames. The athletes also thanked him for the reforms of Olympic Agenda 2020 and the progress being made by the IOC in gender equality.

In Cameroon, President Bach was welcomed by the new IOC Member in the country, Odette Assembe Engoulou, and by the NOC President, Hamad Kalkaba. Honorary IOC Member Issa Hayatou was also present.

The visit began with a dinner given by the Prime Minister of Cameroon, Joseph Ngute. The next day, President Bach was welcomed at the headquarters of the Cameroon NOC by hundreds of school children and many Cameroonian Olympians. He praised the role played by the NOC in bringing the country together, and wished the athletes luck for the Olympic Games Tokyo 2020.

Later, President Bach met with the Prime Minister of Cameroon, and they discussed the excellent relations between the government and the NOC, and the government’s respect for the autonomy of sport.

The President was also able to drop in on the Cameroon International Badminton competition – an event that counts towards Olympic qualification – which was being held in the capital Yaoundé, where he spent time talking with athletes.

Before attending a farewell lunch hosted by the Cameroon Minister of Sport, President Bach was able to visit the African Centre for Olympic Studies to meet staff and see the work being done at the centre.