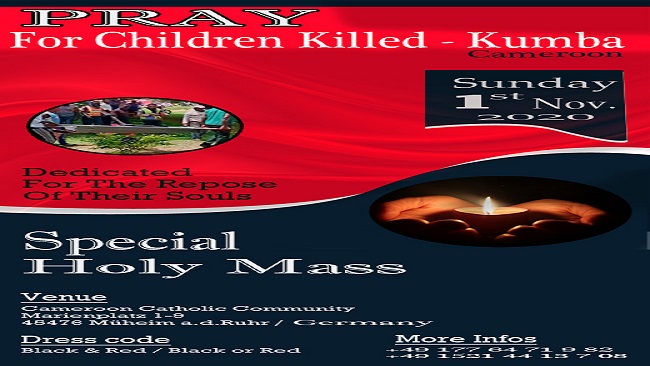 Kumba Massacre: ‘Mass of Angels’ to be held in Germany 0

‘A mass of the Angels’ will be held on Sunday for the eight school children killed in Kumba by unidentified gunmen.

The Parish Priest of the Cameroon Catholic Community in Mulhein an der Ruhr in Germany Revered Father Constant Leke said the children will be sorrowfully missed by everyone.

A Mass of the Angels will be held in St. Mariae Rosenkranz Mülheim an der Ruhr Church on Sunday afternoon at 3pm.

The Chairman of the Pastoral Council the MbangFon Wara Julius has also invited the entire Cameroon Christian community in the Nordrhein Westphalia province in Germany to be a part of the special Holy Mass.

By Soter Tarh Agbaw-Ebai in Mulheim