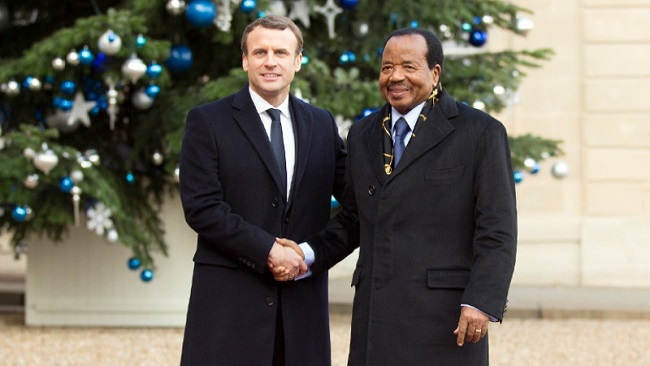 Macron-Biya Warning: Paris is generally supportive of the regime, while Washington is believed to want to apply sanctions 0

Emmanuel Macron has warned Cameroon President Paul Biya that he will “put pressure” on him following what he called “intolerable human rights violations”.

The French President was speaking after the massacre of 23 people on 14 February.

“I will call next week President (of Cameroon) Paul Biya and we will put maximum pressure on him to stop the situation. There are human rights violations in Cameroon which are intolerable, I am doing my utmost,” said Macron, answering an activist who had called out to him during the Paris Agricultural Salon.

The massacre at Ngarbuh — in the anglophone northwest of Cameroon — was carried out by some 50 men in army uniforms, according to aid workers who spoke to survivors. The UN says that 15 children, nine under the age of five, were among the 23 dead.

The Cameroon army says the deaths were the result of the explosion of fuel containers during a fire-fight with secessionist rebels, and claims just five people died.

“France has a complicated role in Africa, when France says: such and such a leader has not been democratically elected, the Africans tell us what are you meddling in? I put pressure on everyone; I work with the African Union to put pressure,” said Emmanuel Macron, arguing that “it is not France that can make democracy in Cameroon, it is the Cameroonians”.

France and the US are currently at loggerheads at how to deal with the situation in Cameroon.

Paris is generally supportive of the regime, while Washington is believed to want to apply sanctions.