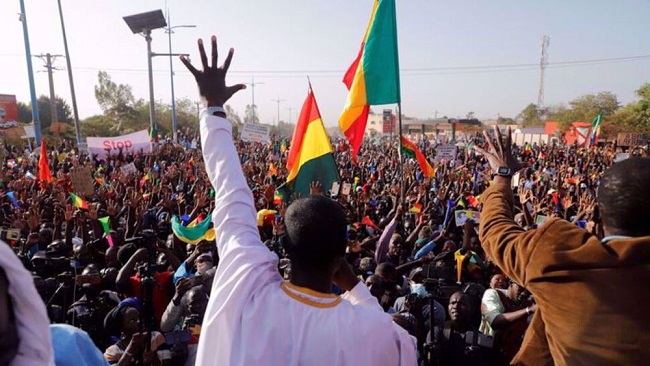 Thousands of anti-French protesters have flocked to the streets in the Malian capital of Bamako to celebrate the expulsion of the former colonizer’s envoy from the African country.

Some 3,000 protesters attended the rally in central Bamako on Friday, waving Mali’s national flags and burning cardboard cut-outs of French President Emmanuel Macron in celebration of the French ambassador’s dismissal.

Mali expelled the French envoy last week over what the country’s transitional government described as “hostile and outrageous” comments by the former colonial power.

Paris pushed economic and other sanctions against the African country after the expulsion, and the European Union also sanctioned on Friday several Malian officials, including the country’s prime minister.

Adama Ben Diarra, a vocal Malian activist and one of those sanctioned by the EU, was one of the organizers of the Friday’s protest. He told the cheering crowd that it was an honor to be on the bloc’s sanctions list.

Diarra said the expulsion of France’s ambassador was an important step and that the next step must be the departure of over 5,100 foreign troops deployed in Mali under the pretext of fighting terrorism and Takfiri outfits linked to Daesh and al-Qaeda.

Relations between Mali and its former colonizer have turned sour after the junta, which seized power following a military coup that ousted President Ibrahim Boubacar Keita in August 2020, ditched previously-planned elections in February and proposed to stay in power until 2025.

France has had more than 50 military interventions in Africa since 1960, when many of their former colonies gained nominal independence.

Anti-French sentiment is on the rise in West Africa as the security situation deteriorates despite the presence of French troops in the troubled region. France recently deployed more troops in the Sahel despite opposition to its presence there.

Mali has become increasingly engulfed in violence since a Tuareg uprising in 2012 was hijacked by extremist militants, who perpetrated ethnic killings and attacks on government forces and civilians.

In 2013, France intervened in Mali to purportedly curb militants who had captured the desert north, before deploying troops across the Sahel. While it has sent more troops and the UN has also its own peacekeeper troops in the African country, violence has continued to intensify and spread in the region.

Nearly 7,000 people died due to the fighting in Mali in 2020, according to the Armed Conflict and Location Event Data Project, while the UN declared late last year that more than two million people had been forced to flee their homes because of the conflict, a number that has quadrupled since 2019.

More than 14 million people in Mali, Niger, and Burkina Faso are now in urgent need of humanitarian assistance.