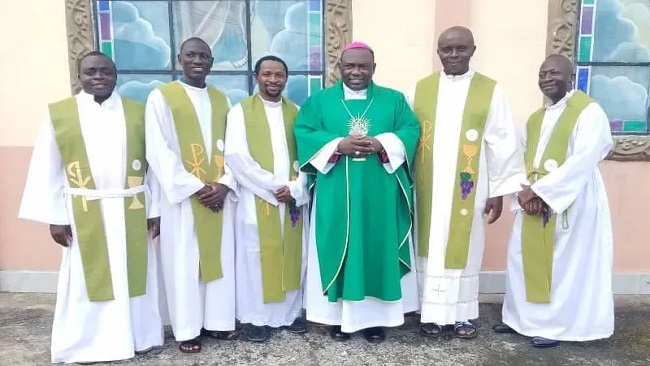 The Diocese of Mamfe has directed that prayers of thanksgiving be said for the release on Saturday of nine people who were abducted in September from a local parish.

The nine were released Oct. 22.

“I urge each of you to pray a decade of the rosary in thanksgiving to God for the safe release of our brothers and sisters who were kidnapped,” Bishop Aloysius Fondong Abangalo of Mamfe said in an Oct. 23 statement to the diocese.

On Sept. 16, unidentified gunmen attacked St. Mary parish in Nchang, in Cameroon’s Southwest Region. Nine people were abducted and buildings on the parish premises, including the church, were burned down.

In his statement announcing their release, Abangalo said: “Permit me to use this opportunity to commend your collective efforts at prayer.”

“I seize this opportunity, once again, to condemn the act of desecrating the church, in the strongest terms possible, and to decry the need for the enhancement of human dignity.”

“Taking away the freedom of our fellow brothers and sisters in order to make money at all cost is inhuman and should be desisted from whoever engages in such,” the Cameroonian bishop said.

“For those who make utterances — categorical or implicit — which fuel such actions, I suppose it is time to rethink your approach and ensure that the dignity of the human person is upheld in every way possible,” he added.

The release of the nine abductees came days after a video emerged on social media showing them asking Abangalo to secure their release.

On Oct. 24 Abangalo announced that a Mass of thanksgiving for the release of the captives was to be said the following day at the cathedral in Mamfe.

The arson attack on St. Mary parish is one of the latest incidents in the context of Cameroon’s Anglophone Crisis.

Unrest in Cameroon has been ongoing since 2016, when the country’s Anglophone community began protests to demand the return of federalism.

Secessionist militants in the English-speaking region of Cameroon have also sought violence against government forces and began attacking military troops in 2017.