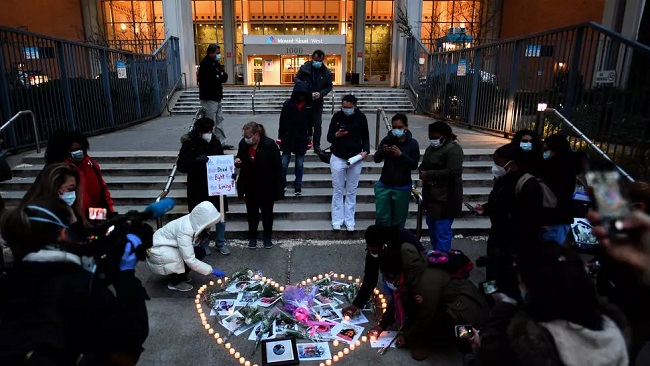 Clutching flowers, candles and photos, New York hospital workers paid tribute to colleagues who have died from the coronavirus since the beginning of the epidemic that has ravaged the city with a modest ceremony in the freezing cold Friday.

Standing in front of the Mount Sinai Hospital Group in Manhattan, with a heart drawn in electric candles on the sidewalk and letters spelling out the word “HOPE”, they made short speeches remembering the nurses, doctors and other hospital workers who fell victim to the virus.

Many clutched photographs of the deceased.

“We are here to honor, to pray and remember our fallen heroes,” said nurse Joanne Mee Wah Loo to the small group of people who came to pay tribute despite the chill wind.

No one knows exactly how many caregivers have died since the beginning of the epidemic in New York City, the most affected metropolis in the US, with nearly 95,000 people infected and more than 5,800 dead.

But was at Mount Sinai that Kious Kelly, the first New York nurse known to die of coronavirus, passed away at the end of March.

“He was a good person, a hard worker, he loved what he was doing,” says Lenore Leiba, a nurse who knew him and attended this tribute.

“It is important to celebrate his life, their lives, and who they really were. They were not worried about their lives, they were thinking of others.”

Tirzah Caraballo, surgical pathologist secretary at Montefiore Hospital in the Bronx, came to honor Christine Hunt, who died last Sunday after 35 years as a receptionist at the hospital.

“She was our mom, our friend, our sister,” Caraballo said.

“She was denied a mask because she was a secretary. And this is why she’s no longer with us.”

In the early days of the pandemic, she explained, administrative staff were not allowed masks as they were reserved for nurses and doctors.

She acknowledges there are now masks for everyone. “Yes, things have improved since, but we lost so many. It shouldn’t have been a decision of who gets a mask and who doesn’t. That’s inhumane,” she said.

The ceremony didn’t last long. It began at 7:00 pm (2300 GMT), the time when the applause for the caregivers in New York City resounded.

A fire truck stopped and several firefighters took the time to applaud, as well as a few passers-by. Forty minutes later, it was over.

“Thank you for coming,” said Judy Sheridan-Gonzalez, president of the New York State Nurses Association, who attended the ceremony. “We hope we don’t have to do this again.”