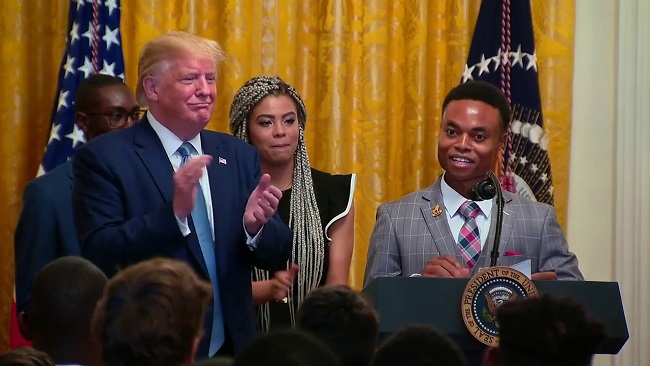 A Nigerian immigrant who travelled to the United States of America using a Cameroonian passport has called on President Donald Trump to ‘build the wall’ on the United States-Mexico border in order to keep illegal immigrants from entering the USA.

According to President Trump, Ben Okereke immigrated to the United States when he was 14 years old after facing ‘hardships” in Cameroon.  Okereke who later joined the U.S. Army said that he was opposed to illegal immigration just like President Trump.

While delivering remarks at the Young Black Leadership Summit 2019 on Friday, Trump introduced Okereke who went on to say,

However, Okereke’s remarks did not go down with some Africans, and in particular, Cameroonians after it was erroneously reported on social media that Okereke himself had entered the US illegally.

Okereke, an Igbo from Nigeria is being accused of adding his voice to Trump’s at the expense of other Africans because he is enjoying America but wants to deny other people the same chance that he got.