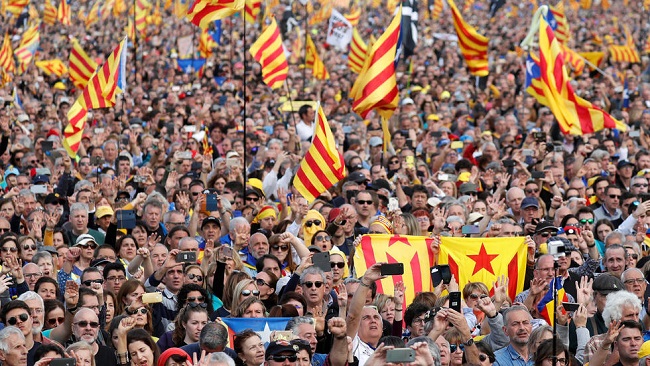 Nine Catalan separatists who were serving long prison sentences for their role in a failed 2017 independence bid were released from jail on Wednesday a day after being pardoned by Spain.

Rain was falling as the seven male prisoners walked out of Lledoners jail some 70 kilometres (45 miles) northwest of Barcelona, where they were met by umbrella-carrying supporters shouting “Independence, independence!”

As they walked through the gates, they were embraced by newly-appointed Catalan leader Pere Aragones, and posed for a photograph alongside a Catalan independence flag and a banner reading “Freedom for Catalonia”, an AFP correspondent said.

At the same time, the two remaining prisoners, both women, were released from two other facilities.

The clemency decision was approved by the Spanish government on Tuesday, with Prime Minister Pedro Sanchez saying he hoped it would draw a line under past confrontations with Catalonia’s separatist-led regional leaders and open the way for talks.

The pardons were published earlier on Wednesday in the government’s official gazette.

The separatists were serving between nine and 13 years in jail for their role in holding a banned referendum in October 2017 that was marred by police violence then followed by a short-lived declaration of independence, sparking Spain’s worst political crisis in decades.

Although the jail sentences have been dropped, all nine are banned from holding public office and the pardons are conditional on them not committing “a serious crime” over the next three to six years.

They have all served more than three years behind bars.

“I am here because the sacrifice they have made for Catalonia and for all of us has been huge,” said Ignasi Sole, a 65-year-old retired mechanic who was waiting outside Lledoners prison for their release.

“It’s a way of thanking them.”

The pardons have been roundly denounced by Spain’s right-wing opposition as well as by many in the pro-independence camp who want a full amnesty that would allow those who fled abroad to return home.

Analysts have also warned it is a risky political gamble that may help calm tensions but won’t solve the years-long turmoil over the separatist crisis, which has left Catalonia sharply divided.

Madrid is hoping the move will give impetus to the upcoming talks with the Catalan government of Aragones who is more open to dialogue than his hardline predecessor.

Aragones and Oriol Junqueras, the prisoner serving the longest sentence of 13 years, who also heads the moderate ERC party, have recently taken steps towards Sanchez by distancing themselves from the path of unilateralism.

“We will devote all our efforts in this new stage to ensuring that negotiation be the basis for resolving the conflict,” Aragones said Tuesday.

“The best way to achieve (independence) is through dialogue, negotiation and agreement.”

When the separatists were sentenced in October 2019 by Spain’s Supreme Court, the ruling triggered an outcry across Catalonia, with thousands hitting the streets in protests that sometimes turned violent.

The move to pardon the separatists was approved by more than two-thirds of Catalans, an Ipsos poll found.

But the same poll found that 53 percent of Spaniards were against the move, which has also been opposed by Spain’s Supreme Court and the right-wing opposition.

In the coming weeks, Sanchez will meet for the first time with Aragones, who has pledged to push for an amnesty and a new referendum on self-determination — this time with Madrid’s approval.

Both are out of the question for the Spanish government.