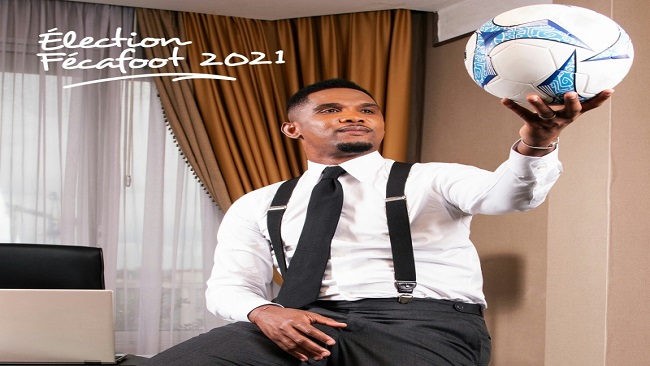 After two months following your election as the president of FECAFOOT, I feel I should write to you, especially after the successful organization of the Africa Cup of Nations (AfCON). A few unfortunate situations almost marred the event, but the population’s response and the government’s determination to deliver went a long way in mitigating the impact of those incidents.

Over the last two months, you have demonstrated that you have a sound understanding of football and people management evidenced by your approach to dealing with football players and the unfortunate in our society.

During the competition, I watched you giving pep talks to the indomitable lions. Instead of donning a suit and sitting at the grandstands, you preferred to ride the buses with the players. Such an attitude only breeds confidence and unites the players who look up to you for inspiration.

Even when the players lost a match, you knew how to raise their spirits. You clearly demonstrated to them that failure is not the opposite of success, but a stepping-stone to higher heights and I am sure that you have bred faith in them.

With the AfCON now history, I believe it is time for us to draw the lessons which will help the national team and the country, going forward.  The country’s national team emerged third in a competition that took place in Cameroon. This is not the best result, and it falls short of the population’s expectation. But the spectacular manner wherein the boys pulled victory out of the jaws of defeat made Cameroonians to forget the disappointment resulting from the defeat Egypt handed to the country’s national team. Your pep talks had clearly taught the boys that the difference between the impossible and possible resides in man’s determination and their determination brought home a bronze medal.

While the country basks in its consolation, we must understand that as a nation, we must prepare well ahead of time if we have to continue winning trophies. There are many competitions ahead of us. We still have to lock horns with Algeria and if we do not leave Algeria with a bloodshot eye, Cameroon may not be represented in Qatar.

To ensure the county’s national team stays on the winning side, FECAFOOT must establish a talent scouting mechanism which should help the national team coach identify talent across the country. This is all the more urgent as the current crop of players is aging and clearly showing signs of fatigue.

There is a huge talent pool in Cameroon. Identifying talent is nothing new in Cameroon. Claude Le Roy, a former coach of the Indomitable Lions, did this when he arrived in Cameroon in the 1980s and this initiative resulted in the discovery of talented players like Victor Ndip Akem and Tataw Eta Stephen who were little known in Cameroon before his arrival and that initiative brought immeasurable glory and recognition to Cameroon.

Based on your own story, it was the same Claude Le Roy who gave you a chance for you to play in the national team. He had identified you as a young talented boy whose skills needed to be developed and honed, and his decision turned out to be right as you have brought fame and joy to millions of Cameroonians as a global football icon.

I understand you are determined to rebuild the country’s shattered football championship which has faced neglect for years. This will be a great move as it will enable many young men to ply their trade and hone their skills. A good national championship will serve as a solid foundation for the country’s national team.

Local talent can also deliver beyond expectation. All the players need is someone who can breathe faith in them. Egypt has proven that a team made mostly of local players can be a threat to many national teams on the continent. If Egyptians can do it, Cameroonians can also do it! Cameroon has the resources and I strongly hold that you can convince the political leaders to change the way they see football and footballers.

The fact is that achieving much in this sector will require much financial resources, but if the country continues to see football as a tool for entertainment, then Cameroonians should not be disappointed when the national team loses matches. Any endeavor that is under-resourced will surely not deliver the results expected of it.

While financial resources are hard to come by, I know you will take the right steps to entice and attract the private sector to participate in the development of the country’s football sector. I have been seeing you signing partnership agreements with some companies and international organizations, and this gives hope to millions of Cameroonians. I would urge you to continue in this path and you should know that millions of Cameroonians stand with you in your dream to give the country’s youths a fighting chance in life.

While the private sector and other organizations are likely sources of sponsorship, I would suggest that we also look inward. During the just ended AfCON, Cameroonians were proud to wear the country’s colors. All types of memorabilia were sold. More than ten million Cameroonians happily bought the national team’s jersey, flag, and other memorabilia to demonstrate their support for their national team.

Unfortunately, this money went to private pockets. A good national team jersey sold for CFAF 10,000 and if 10,000,000 proud Cameroonians bought these jerseys from a FECAFOOT designated store, FECAFOOT would have netted about CFAF 100,000,000,000 in a month. Such money could go a long way in financing football development in the country. Remember! The jersey is just one item. There were also other items purchased by the happy people of Cameroon.

The challenge you now face is for you to work with the political leaders for the establishment of a “Lions Boutique” where all jerseys would be sold. The politicians should come up with a law banning the production of national team jerseys and other memorabilia by individuals who do not even pay taxes.

There are other ways FECAFOOT can raise money to develop football in Cameroon. I will be happy to discuss that with you or your representative in private.

Have a good day and May the Lord grant you more energy as you seek to raise football standards in Cameroon.