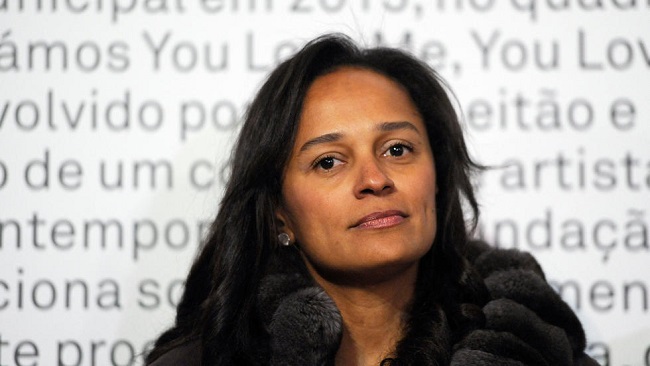 The Angolan government’s request to freeze overseas accounts of Isabel dos Santos has been granted by the Portuguese authorities, a number of media outlets including the Expresso newspaper have reported.

This is the latest leg in a resolve by Luanda to bring the billionaire daughter of ex president Jose Eduardo dos Santos to book for alleged corruption and pillaging of public funds.

Isabel was head of the country’s oil firm, SONANGOL, a post she was controversially handed by her father. President Lourenco fired her months after taking office in 2017. Her brother Jose Filomeno is also facing corruption charges over his time at the head of the national sovereign fund.

Local accounts of Ms Dos Santos were frozen by a court late last year before an exposé into corruption files linked to her wealth were released last month. She has repeatedly rubbished the reports and stressed that she had earned all her wealth legally.

Luanda has slapped charges of embezzlement and financial misappropriation against the 46-year-old who has been living outside the country for the better part of the time that her father left office. She is on record to have said that she would consider running for the presidency when next polls are held.

“With the support of everyone, civil society and specialised international institutions, we are implementing initiatives to combat money laundering, as well as to recover assets that have been set up with public resources… (or) been illegally transferred… outside the country,” he said.

He said his government was determined to fight corruption in the graft-tainted oil-rich country.

“We are deepening the foundations of the rule of law, where there is no impunity for acts of corruption and for practices of nepotism and influence peddling,” he said in an address during Merkel’s one-day visit to the country.

Dos Santos built up a vast business empire over the past two decades, with stakes in several Angolan and Portuguese companies. Her fortune is valued at $2.1 billion by Forbes Magazine, which named her Africa’s richest woman in 2013.