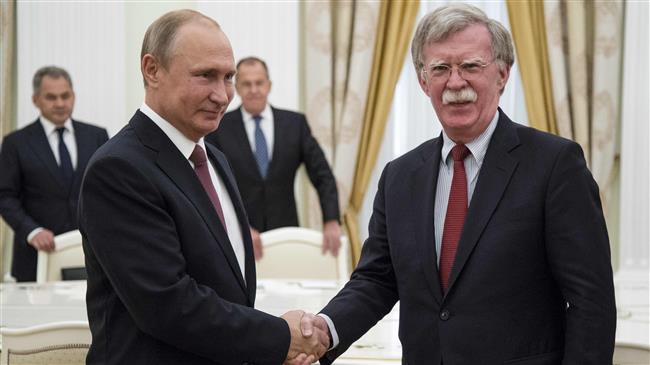 Relations between Russia and the US are not in the “best state” these days, Russian President Vladimir Putin has told visiting US National Security Adviser John Bolton, citing the ongoing political discord in America as the main reason.

The parties expressed their willingness to search for ways to enhance bilateral relations.

“Unfortunately, I have to say that Russian-US relations are not in their best state now,” Putin said at a meeting with Bolton at the Kremlin on Wednesday. “I have said this in public on many occasions, I would like to repeat at this meeting with you. I believe that to a great extent this is the result of a bitter internal political struggle in the US.”

The Russian head of state expressed hope that the visit would pave the way for restoring ties.

“Your visit to Moscow provides us with hope that we will be able to take at least the initial steps towards restoring full-fledged relations between our countries,” Putin said. “Russia has never sought confrontation.”

Ties between the Kremlin and the White House have fallen to a new low under US President Donald Trump.

US intelligence services have accused Russia of cyber interference in America’s democratic process, specially during the 2016 presidential face-off between Trump and his Democratic rival, Hillary Clinton.

Trump, who has been willing to extend ties with Moscow, is currently the subject of a high-profile investigation for alleged “collusion” with the Kremlin.

Moscow and Washington have also clashed on a range of other issues, including the war in Syria, the Ukraine conflict and the 2015 Iran nuclear deal.

Putin told Bolton that both sides should explore ways “to mend full-fledged relations based on equality and respect for each other’s interests.”

Trump’s national security advisor said he wanted to discuss boosting Russian-US cooperation in the areas where both sides see eye to eye.

Hailing Putin’s summit with Trump on the sidelines of the G20 summit in Germany in July last year, Bolton assured the Russian leader that Trump was committed to improving ties.

Earlier in the day, Bolton sat down for talks with Russian Foreign Minister Sergei Lavrov in a meeting that revolved around bilateral ties.

“The parties held an exchange of opinions on the topical issues of the international agenda, including the situation around Syria and in Ukraine,” Russia’s Foreign Ministry said in a statement.

“Considerable attention was paid to the issues of bilateral relations,” it added.
Source: Presstv