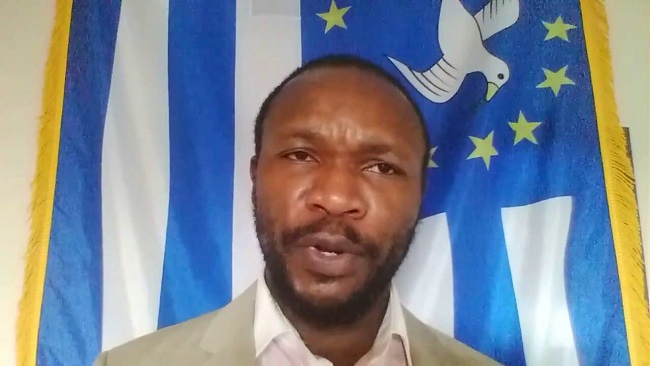 Cho Ayaba, AGC leader was quick to spin the news. First, he denied knowledge of his own meeting, and then shifted responsibility, blaming the Interim Government for the arrests at the meeting. But the meeting in question that saw the abduction of eight Southern Cameroons refugees in Calabar was actually organized by Dr. Ayaba.

Cameroon Intelligence Report has confirmed that Cho Ayaba used a third party who was among the arrested, to plan the meeting. The so-called Ambazonian freedom fighter was to address the meeting through a conference call. The meeting was meant to persuade attendees, most of whom were his acolytes, not to attend or participate in the joint self-defense initiative that was being organized by the Interim Government.

The event, aimed at gathering as many self-defense proponents to the Calabar meeting as possible. Ayaba was going to sway them from participating in any IG joint self defense initiative. At the end of his address, Ayaba’s (lady) representative who has lived in Calabar for years runs a hotel business and trades in petrol had solely put the meeting together on Ayaba’s behalf, would distribute as support from the AGC, cash from Dr. Ayaba. It was a stipend they would use to pay their transportation back to Ikom.

This lady, one Emerald Johnson, it should be recalled, had hosted Dr. Ayaba in her motel while he visited Dadi on November 2017, to tour the camp his ADF boys were being trained. She didn’t only host Ayaba, she accompanied Ayaba, sitting in the back seat in the car with him to Dadi. It wasn’t a coincidence that Ayaba chose her and her hotel facilities to host the meeting in Calabar that saw the arrest of innocent needy refugees who had gone there hoping they did get some money after Ayaba addresses them.

Unfortunately for those who ignored the warnings and went to the meeting, they were picked up right at their hotel locations before the meeting even started. News began to filter out immediately after the arrest from the police station in Calabar as one of them had succeeded to sneak his phone into the cell. From behind bars, he began sending text messages to others who had stayed back in Ikom. He said what happened in Abuja has happened to them, that they have all been abducted.

When things took the wrong turn, Cho Ayaba spun the news, denying knowledge and responsibility for the meeting entirely. First, he accused the IG of calling the meeting, actually naming Acting President, Dr. Sako and Homeland Security Secretary, John Egywang as the ones who called for the meeting. He said that the Acting President set up the meeting purposefully to get his supporters abducted like in the Abuja case. To some other people, he said that the IG had called for the meeting to persuade his ADF members to defect him and join the joint initiative that was being put together by the IG for self-defense.

When contacted, both the Acting President and Homeland security chief denied ever knowing about the meeting. The IG self-defense meeting was to come up on the weekend of Saturday March 10. But before the meeting, Ayaba and his surrogates let the cart, accepting he actually called the meeting before going viral with attacks on Chris Anu, Secretary of State for Communications for revealing the identity of Emerald Johnson, the lady who hosted the meeting. Ayaba and his gang have said that by revealing the name of the lady, Anu put the lives and security of refugees at stake.

Cameroon Intelligence Report talked to Anu, hitherto, Editor of the Southern Cameroons Journal, asking him why he put the name of the lady out knowing that she was a Southern Cameroonian and he stated; “I had no clue who the lady was, not until news came to me afterward that the same lady was the one who accompanied Cho Ayaba to Dadi,” he said.

Anu pointed out that; “I received a WhatsApp post from Alex Mbianda in Boston that said Atam Milan had conspired to get some woman in Ikom to collect names of refugees 11 years and above and send to him.” Anu said “the post came across as legit, and I was like, this concerns refugees. If I do nothing and something happens, people may blame me for not following up on Mbianda’s lead.” He said he called a number of people in the refugee camp, including George Tando who was accompanying the two women from London and Germany to find out what precisely their assignment was. He said he called about four different workers in the camp to find out who was it Milan was conspiring with to illegally sneak refugees to South Africa. He said he was given two phone numbers of a woman who was supposed to be that of Milan’s accomplice, all belonging to the Johnson lady.

“When I called her,” Anu said, “I told her my name is Ashu Martin. You see, in my head, I was like if I should say I’m Chris Anu, and she has anything conspiratorial, she won’t want to talk to me. So I gave her a different name to get her open up and talk to me. But she began immediately yelling at her lungs saying that people should stop calling her, that she knows nothing about the Southern Cameroons crisis other than what she sees on Facebook. She even threatened to sue, saying that since morning, so many people have been calling her number and that she didn’t know why. And then she dropped the call.” Anu explained.

Anu said that since nobody was, initially, – not the IG, nor any other group was accepting responsibility for the meeting that the lady had put together, his immediate conclusion was that Emerald Johnson must have been an agent of the Nigerian Gov’t used to set-up the arrest of the eight refugees. “Remember, she had told me earlier in the phone call that she’s Nigerian, and that she knows nothing about the Southern Cameroons crisis. So later on, when news of the arrests came out and it happened that she was the one who organized it, and coupled with the fact that neither Ayaba nor the IG would take responsibility, I took her for an agent, thinking the meeting was solely her making. In my heart, I was like if she actually plotted the arrest, then she should be exposed, people should know. I had no idea, not until I mentioned the name publicly, that the AGC now claimed that Emerald Johnson was their supporter and a close friend of Dr. Cho Ayaba whom he had used to convene the meeting.

“I was taken aback by AGC attacks on me. I thought by revealing the name of the woman, I was indeed helping our people know who the agent behind their arrests was.” Anu stated. “Of course, if I had known that comrade Ayaba organized the meeting, or let me put it this way; If Ayaba had blown an alarm that he put a meeting together and his supporters got abducted; or think about it this way, if the lady had told me earlier in the phone call that she was Cameroonian and then later on I come to find out that she was at the Centre of the arrests, I probably would have treated the story in a different way. But here was I thinking we have a repeat of the Nera Hotel incident and the agent must be exposed” Anu explained. “I called the lady just once. And the call was only following up with Mbianda’s lead that some woman was about taking names of refugees to forward to Milan.

“Now, they are out there blaming me for blowing the cover of a lady they all knew supposed to, maybe have been protected instead of blaming themselves for initially trying to shift responsibility for the meeting, that isn’t leadership, Anu concluded.