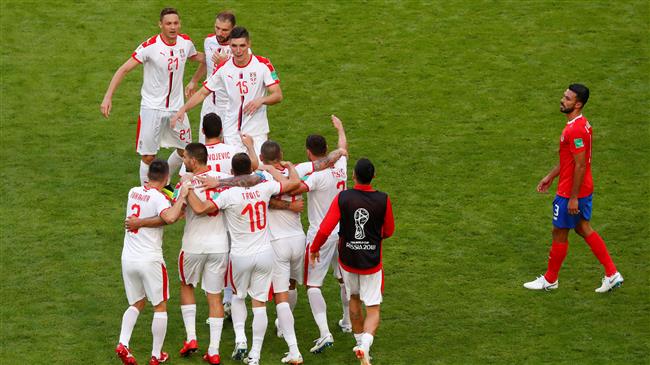 The Serbia men’s national football team has achieved a convincing victory in the preliminary round of the 2018 Fédération Internationale de Football Association (FIFA) World Cup in Russia, and scored a triumph against Costa Rica.

Held at the Cosmos Arena in Samara, Serbia’s Eagles notched up a 1-0 win over Los Ticos (The Ticos) in the opening Group E match on Sunday.

Even though both sides had a number of scoring chances in the first half, they ended the period tied at one.

Serbia midfielder Sergej Milinkovic-Savic also wasted a good opportunity in the 28th minute as he was ruled offside.

After the break, a curling free kick from Serbian captain Aleksandar Kolarov in the 56th minute secured the Eagles’ 1-0 victory.

Kolarov, who plays for Italian club Roma, struck the ball over the wall with his left foot and past outstretched Costa Rican keeper Keylor Navas to sore the winner into the top right corner of the net.

Later on Sunday, Germany will face Mexico in the opening World Cup Group F fixture at the Luzhniki Stadium in Moscow.

The 2018 FIFA World Cup will take place from June 14 to July 15. Russia opened the event against Saudi Arabia in a Group A fixture at Moscow’s Luzhniki Stadium. The hosts won the match 5-0.