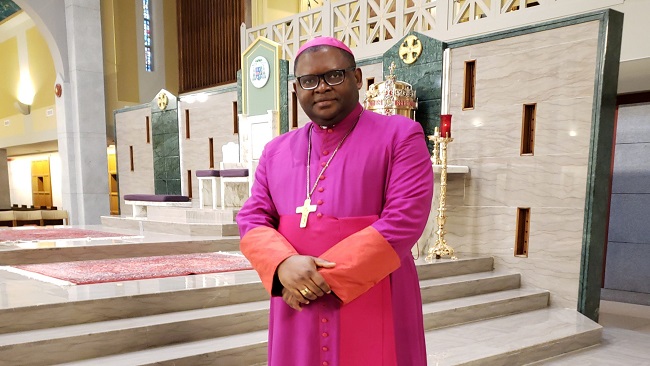 Even with sophisticated weaponry, the Cameroon military finds it hard getting to parts of Cameroon’s English-speaking regions where separatist militants operate.

It’s even harder for government officials and anyone who doesn’t adhere to the separatist agenda – an agenda that foresees the English-speaking regions separating from the rest of the country to form a new nation they call Ambazonia. English speakers make up about 20 percent of the population, while the rest of the country is predominantly French speaking.

Since the Anglophone Crisis exploded in 2016, at least 4,000 people have been killed and over a million forced to flee from their homes, with about 70,000 seeking refuge in neighboring Nigeria.

However, Bishop Michael Bibi of the Diocese of Buea in the troubled South West Region, braves the danger while visiting his flock.

“I go out for pastoral visits, and I go to places where government officials cannot go without the military, and if I were to go with the military, there would be fire exchange,” Bibi told Crux.

On some of those pastoral visits, the prelate has faced life-threatening situations, including once being kidnapped twice in a 48-hour time span.

The first time was when he was on his way to Kumba and gunmen stopped him.

“As I passed Batibo town, these gentlemen came out of the forest; they surrounded me, entered my car – two of them with guns,” Bibi recalled.

“They seized my phone and took me into the forest. There were several other cars there and other people who had been kidnapped. They asked us to give our identity cards. Their commander was there and as I came out of the car, the two men all pointing their guns at me, one woman, one of our Christians – who was also kidnapped – just ran to me crying ‘Bishop bless me, bless me!’  I said a prayer, and I blessed her, and their commander asked her whether she knew me. And she responded: ‘He is our bishop.’ So the commander asked that my phones and ID card be returned and that I should go. I asked him what happens to the other people who were held there, and he brandished the gun: I had no right to ask any questions. So I left, went to Kumba, celebrated the Mass and towards the end of the Mass, I was told that some Reverend Sisters had been harassed, their wind screens were shattered. And I had to return because the next day I had to celebrate Mass in Dchang. The general feeling was that I should not travel, so I decided to take an alternative road to Bamenda,” he said, referring to the capital of the North West Region.

Yet on this alternative route, the bishop met another group of fighters at a locality called Bako-Bakundu.

“These boys [the separatists are known as the Amba Boys] just came out of the bush, surrounded us and asked us to follow them. When we got to wherever they took us on a road to the forest, they started interrogating me. They said we were supporting the government and I said, the church is for everybody. We talk with government people, and we talk with separatists and we as a church are out for justice. They said they were going to shoot us, and burn the car and I said, ‘you people are free to do anything, but allow these two young men [the driver and his brother] to go’,” Bibi said.

“Their leader said he had been an altar boy. I was stunned. I asked him if he was Catholic, and he said yes. I asked him whether he prays the rosary. He said he hadn’t got one. I asked him if I should give them some. He said yes. I went to the car, took some rosaries, blessed them, and gave them to them. One wore his rosary, another said no; don’t put that thing on your neck because it can kill all your powers,” the bishop remembered.

He said while the others were still calling for separatists to burn the car and kill them, the former altar boy ordered that no harm should be inflicted on the bishop, because, as he put it, “this man is an innocent man. We have examined him from beginning to end; we don’t see anything he has done that should make us treat him badly.”

The prelate was released, but warned to stay in the nearby village and proceed the next day, because the next group of fighters might not be so kind.

“The leader of the group approached me and said he wanted me to forgive him. I said I didn’t hold them in my heart, because at least I was able to explain to them whet the church has been doing and will continue to do as far as the crisis is concerned,” Bibi said.

He said, out of his own volition he gave the separatist some $65. “It was all I had.”

“When I finally came out of the forest and met the villagers, everybody was happy, and there were Catholics coming and crying and asking for blessings. One Christian offered to give us accommodation. We went there and the man’s wife prepared us some good chicken and Irish potatoes,” the bishop recounted.

Bibi also recalled another incident when he traveled to Munyenge, about a two-hour drive from Buea. He was celebrating Mass when he heard gunshots outside.

“I was actually giving the homily; there were about five gunshots outside. I just said, wow, my brothers are welcoming me,” he said.

He said the dire security situation notwithstanding, he as bishop as well as his priests have a duty to keep preaching the Gospel of Christ.

“One of the things we have done is all the bishops have made sure that we don’t close down any parish. No matter how difficult it is, the priests are on their seat. And I really want to use this opportunity to really thank the priests, because in every area where people have fled, the poor priest is there,” he said.