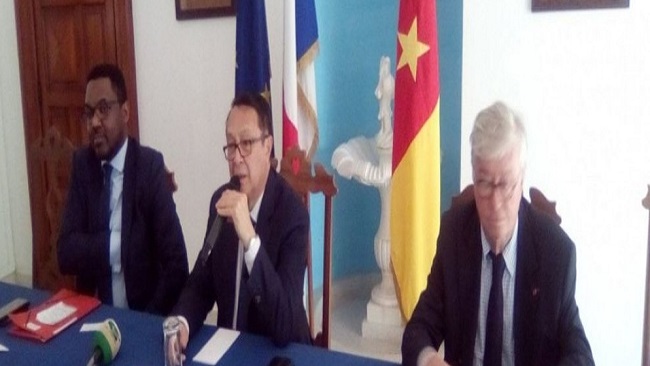 Members of a French parliamentary delegation that traveled to Cameroon on January 14, 2020 to seek the truth and get a feel of the reality on the crisis in Southern Cameroons have reportedly come to the end of their stay in the country.

The MPs Rodrigue Kokouendo from Seine-et-Marne who also moonlights as the Vice-president of the Committee for Foreign Affairs of the French National Assembly was in Yaoundé with Didier Quentin, MP for Charente-Maritime.

The French parliamentarians revealed earlier today that they were sent on a mission by the president of the foreign affairs committee to Cameroon to get an understanding of the crisis in Southern Cameroons.

Both men hinted that they met officials of the Biya Francophone regime, leaders of French Cameroun political parties represented in the National Assembly, civil society actors and members of the clergy.

“We came to Cameroon to inquire about the situation in order to report to our colleagues in the national assembly,” said MP Rodrigue Kokouendo.

“The fact of having come to the field gives us a lot of very useful information,” added Didier Quentin.

Ever since the French Cameroun dictator, Paul Biya declared war against the English speaking people of Southern Cameroons-Ambazonia, the fighting has left more than 20,500 dead and more than 530,000 displaced, according to NGOs and the Ambazonia Interim Government.

The Biya regime has rejected these figures claiming that human rights groups are swelling them up to get more help and precipitate foreign armed intervention in Cameroon.