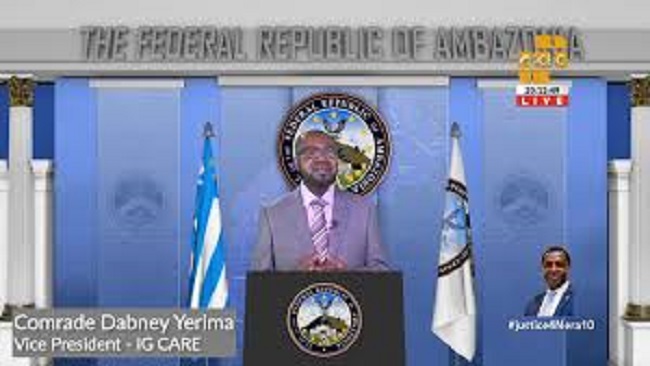 The Ambazonia Interim Government has strongly condemned the brutal attack of the Biya Francophone regime on Batibo in the North West and the killing of innocent Southern Cameroons civilians including women and children, saying the people of the Federal Republic of Ambazonia and Southern Cameroons Self Defense groups have the right to respond to any French Cameroun terrorist moves.

“It is the right of all Southern Cameroons resistance groups to act and defend the homeland in the face of the aggression and terrorist moves of the Biya French Cameroun regime,” Vice President Dabney Yerima said on Thursday.

Vice President Dabney Yerima emphasized that the Biya and his Beti Ewondo criminal gang in Yaounde will sooner or later shoulder full responsibility for the crime and the consequences of its aggression on the Federal Republic of Ambazonia.

Dabney Yerima urged the UN, the European Union and international organizations such as the Commonwealth to fulfill their legal, moral and human responsibility to defend the oppressed Ambazonian people and condemn the French Cameroun regime’s terrorist moves.

Yerima furthered that the international community should also take measures to stop the continuation of such crimes by the Yaoundé regime, which is the main factor behind instability and insecurity in the two Cameroons.

By Isong Asu with files from Chi Prudence Asong