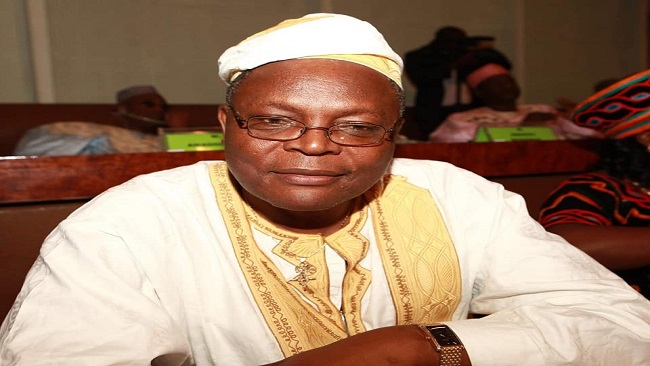 Dear friends of the media,

Thank you for your presence.

Since the beginning of the making public of the existential question in the North-West and South-West Regions which was allowed to degenerate into a problem, then to a crisis and now to an armed conflict reminiscent of a civil war, the SDF has deployed all possible means to draw the attention of parliament and the government on the threat to national unity if definitive solutions were not found for these existential problems raised by the English Speaking minority which freely took a political decision on the 11th of February 1961 to, on the attainment of its independence on the 1st of October 1961, join the then independent Republic of Cameroon in a Federation of two States equal in status.

It is important to stress that the root causes of this problem has nothing to do with language, the patronage of appointments, special status just to name these. They are just a manifestation of the problem.

The present conflict arose when contrary to the Foumban agreement all these were gradually and systematically deformed, adulterated, polluted, dismantled and erased through discrimination, marginalization, domination, subjugation and assimilation by the Francophone majority government. All this was to satisfy some weird ego that was sloganized as ‘national integration’. It has failed.

The core value systems of the English-speaking people need to be restored, protected and defended.

The National Executive Committee of the SDF party has met several times since 2016 and at each time came out with special resolutions decrying the inaction of the government and its application of strategies that rather inflamed the people of these two regions.

The National Chairman of the SDF has written personal letters to the President of the Republic drawing his attention to the gravity of the situation but these letters fell on deaf ears. The National Convention of the party did same but was equally ignored.

The SDF has even taken a political risk for the sake of peace and national unity by putting forward its chairman as a mediator in this self-imposed conflict which was brought about as a result of poor governance, arrogance and self- deceit. This worthy offer was treated with contempt.

The National Chairman of the SDF was further mandated by the National Executive Committee to seek ways and means in collaboration with the Churches, the traditional leaders, the political elite and civil society for a definitive solution to this crisis. His findings were made available to government and the public in a blue print document that clearly stated the root causes of the problem and proposed long lasting solutions to the problem. The regime equally ignored this effort.

The SDF Members of Parliament engaged new actions as the crisis worsened.

When the situation in Bamenda degenerated into the teargassing and the shooting with life bullets of the population, we, the Members of Parliament of both houses of Parliament, went to Bamenda to show our concern.

When the university of Buea authorities in collaboration with the administration brought mayhem on the university students in Buea, we also went to Buea to similarly show our concern and gather facts on the atrocities.

Armed with these facts, on our return to Parliament, we confronted the authorities of the National Assembly and the Senate to immediately engage in seeking a long lasting solution to the crisis through frank parliamentary debates. The deaf ear that the CPDM dominated houses gave to our requests resulted in very fiery denunciations from the rostrum on our part.

As can be seen, the SDF has made a lot of efforts to get the CPDM regime to join forces with it to nib this crisis in the bud. The CPDM consistently ignored the SDF preferring to consider it as ‘the face behind the mask’. Instead they went around  talking largely to its members and sympathizers to( itself )  thus allowing the situation to degenerate into the mess that we now find ourselves.

Things came to a head when government systematically and recklessly abducted the English Speaking citizens with whom it was negotiating  and deported them to detention centers in Yaoundé to eventually face trial in the French Language before the Yaoundé Military Tribunal on trumped up charges.

This led to calls on the SDF Members of Parliament by their electorate to resign from Parliament. These calls were intensified when on the 22nd of September and 1st October 2017, the military opened fire from the ground and from the air with helicopter gunships on unarmed citizens of the North-West and South-West Regions killing several hundreds, maiming thousands and many more thousands becoming refugees in the Federal Republic of Nigeria and elsewhere and hundreds of thousands becoming internally displaced persons. These calls have intensified with time thus effectively making their elected representatives internally displaced persons.

The present situation is too ghastly to contemplate as the recently pompously labeled Major National ‘Dialogue’ failed to address the problem. This unilaterally organized and conducted ‘dialogue’ fell far short of the call by the United Nation,  the international as well as national communities (excepting the CPDM), for an all-inclusive dialogue without pre conditions in order to get to the root causes of the conflict and seek solutions for its resolution. The SDF tabled to the organizers of this ‘dialogue’, proposals that would have rendered it inclusive and to take place in a serene atmosphere but they were all turned down.

Notwithstanding this contempt with which the party was treated, the SDF decided to participate in the ‘dialogue’ because of its long standing quest for peace and a return to normalcy throughout the country.

The results of the ‘dialogue’ so far after more than six weeks has been the appointment of Senior Divisional and Divisional Officers throughout English Speaking Cameroon and the calling for elections timed to disrupt the November budgetary session of Parliament.

If this problem is not given a political solution, any military solution will just make it lie low to resurface with vengeance in future. It is worth noting that very few of the leaders and fighters in the Restoration movement were born before 1961.

Consequently, having regard to all of the above and many more and in keeping with the SDF party policy,

The SDF Parliamentary Group informs the national and international communities that it is taking action to implement party policy at the level of Parliament which in summary calls for a definitive solution that will bring to an end the civil war in English Speaking Cameroon thus   enabling the resumption of normal social, economic  political activities. And for children to go back to school, having been absent from school for four years as a result of this crisis.