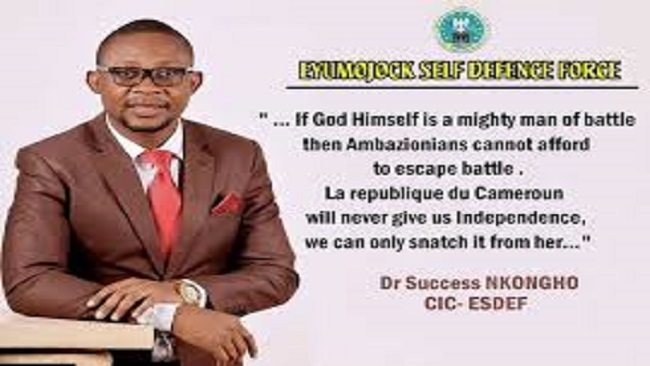 A source close to Nkongho Success in Yaounde has contacted the Cameroon Concord News Group to denounce what he claims is Mr. Nkongho Success’ betrayal of the Southern Cameroons president, Julius Ayuk Tabe in particular and the revolution in general.

The source, who has elected anonymity and has also infiltrated the Cameroon anti-terrorism squad, says Success Nkongho is a demon whose greed is destroying a revolution whose success would have benefitted all Southern Cameroonians.

While in Nigeria, Success befriended Sisiku Julius Ayuk Tabe and earned his confidence, making it hard for Mr. Ayuk Tabe to ever think he could betray him.

Success worked with the anti-terrorism squad to bring down Julius Ayuk Tabe and his team since he understood Mr. Ayuk Tabe’s schedule and was considered by Mr. Ayuk Tabe as his right hand man and junior brother since both of them are from Manyu Division.

Mr. Success Nkongho who claims he holds a PhD entered into a special deal with the government aimed at totally destroying the revolution and the return of the 87 refugees is part of the strategy to hoodwink the international community into believing that Southern Cameroonians living in Nigeria are ready and willing to return home.

The deal almost fell through when Mr. Success Nkongho insisted that if he had to return to Cameroon, he must come with a bunch of refugees, a group he now claims voluntarily opted to return home.

Currently, Mr. Success Nkongho is talking with Field Marshal and the government is looking forward to field marshal downing his weapons.

The talks are ongoing, but Field Marshal has some conditions which are very challenging to the government, including the pardoning of all his fighters.

Mr. Success, who has never really succeeded at anything, is currently being protected by the Yaounde government where he has been offered decent accommodation and financial assistance to enable him live a decent life that might convince other core Southern Cameroonians.

His entire family had been moved to Yaounde by the Yaounde government before he landed at the Nsimalen International Airport on December 31, 2019, as part of the deal he signed with the government, including his brother Besong Roland who was a motorcycle rider in Mamfe town.

Another brother of his Tanyi Emmanuel is also living in Yaounde and all of them are having state protection due to Mr. Success’ betrayal of the cause.

It should be pointed out that the son of Mr. Besong Roland, Success Nkongho’s brother, is still within the ranks of Amba fighters in Manyu Division and there are fears that he could be a decoy working for his uncle.

A native of Etemetek, a small village some 7 km from Mamfe town, Mr. Success Nkongho grew up in New Layout, Mamfe town, where he is notorious for his dishonesty and lies.

His mother, who was also dishonest, married twice and this caused great confusion in the family.

Indeed, the man who was supposed to marry Mr. Success Nkongho’s mother was from Equatorial Guinea.

He came to Mamfe and did all the traditional rituals. He paid the bride price and went back to Equatorial Guinea where he was working as a hunter.

While he was back in Equatorial Guinea, another man, Mr. Nkongho’s father, came and performed the same rituals and got married to his mother.

It was assumed that the Equatorial Guinean had done some mysterious things to her and the long pregnancy was a punishment for her dishonesty.

The Cameroon Concord News Group is on this story and will be publishing more as its undercover agent obtains more details.