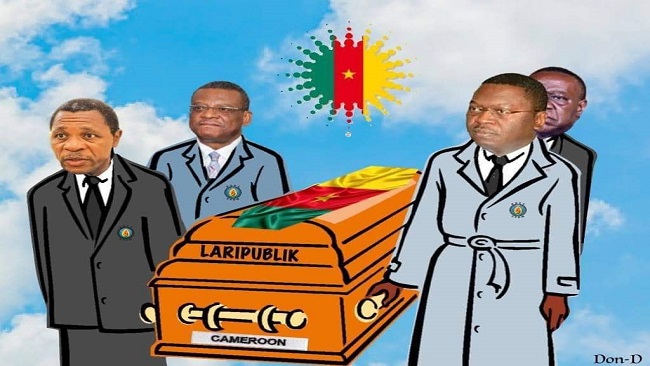 Southern Cameroons Crisis: Yaoundé is in a cul-de-sac 0

Four years ago, nobody thought the whole notion of Southern Cameroons independence could ever be taken seriously.

For many in government, those who called for the separation of Cameroon, a country touted as an oasis of peace in a desert of chaos, were adventurers who were playing with fire.

The Yaoundé government which is known for its penchant for repression declared the angry Southern Cameroonians terrorists and immediately proceeded to implement its strategy of repression in the pious hope that future adventurers would think twice before calling for any independence.

This wrong assessment of the situation pushed bureaucrats in Yaoundé  onto the airwaves to pontificate on things they had very little knowledge of, confidently telling the French-speaking majority that the military’s mission in the two restive regions of the country would be swift and short.

In less than two weeks after the country’s president, Paul Biya, declared war on two English-speaking regions of the country, the government dispatched hundreds of its outdated tanks to many remote parts of Southern Cameroons not knowing that the outcome could be the reverse of what many in the country’s bureaucracy were sure about.

Little did the government and its poorly trained soldiers know that they were treading on dangerous terrain. The government was confident that it was going to roll back the “adventurers” right back to where they came from, but it did not know that behind the ragtag military, there was massive financial and moral support which will help the fighters to give the government’s military, a run for its money.

For years after, the ragtag military has morphed into a very dangerous force that is wreaking havoc on the military and its expensive equipment.

The last couple of months have been particularly tough for the military. The various factions seem to be ganging up against the military and the northwest region in particular has become a graveyard for many soldiers and their military equipment.

Last week was indeed one of the bloodiest with Ndop fighters demonstrating that they can hit the military anywhere, anytime and where it hurts the most.

Southern Cameroonian fighters are no longer interested in exchanging fire with the fear-filled soldiers. They are now employing a more sophisticated and effective method to hit the military in its soft underbelly.

Soldiers are now being blown up like dilapidated buildings with many bursting like rotten tomatoes. The use of IEDs by Southern Cameroonian fighters is one game changer that has left the Yaoundé regime in the grip of mobid fear and in a cul-de-sac.

The government seems to be frozen in its position. The country’s president, Paul Biya, had vowed that there would never be talks on the form of the state, but things are changing on the ground and if care is not taken, Southern Cameroons’ independence might come sooner rather than later.

The fighters on the ground are determined and the massive flow of cash from many parts of the world is giving the fighters a morale boost.

The government is confused. The Southern Cameroonian crisis has become a hot potato in the government’s mouth. The government must decide. It must change its position. Time is of the essence in this situation. Cameroon is falling apart.

The government must come back on its decision. It will never win this war. Its soldiers are deserting and this is rendering the military more vulnerable.

Despite numerous recruitment drives for more gendarme officers and soldiers in the country, the Yaoundé government is still concerned as its hope of winning this dirty war is diminishing by the day.

Most of the soldiers being killed are young men from the South and Center regions and the numerous body bags heading to those regions are gradually convincing the president’s supporters that he had engaged in a journey that might not be ending anytime soon.

The Cameroon Concord News Group has been talking to some soldiers in Yaoundé and many say they are permanently in fear. Many have lost their mental health and the mere thought of being sent to the warfront has transformed the stomachs of these soldiers into butterfly tanks.

More than three thousand soldiers have been killed and a similar number has been maimed. Most of those who get deployed to Southern Cameroons usually visit their doctors and they feign illnesses just to obtain either exemptions or 6- monthly sick-notes.

Young recruits are quitting the military daily. Many in the military are now handing themselves in to be imprisoned for 6 months (customary prison term for disobeying war orders) instead of going to Southern Cameroons.

The much-touted Cameroon military is gradually falling apart, especially as thousands are deserting and heading to neighboring countries.

To encourage the country’s military, the government recently issued a memo to the army and gendarmerie to the effect that should a soldier die in combat, his or her family would receive a paltry sum of CFAF 5 million.

Unfortunately, this financial incentive is not helping and many young soldiers are plotting to quit the beleaguered and poorly-paid military.

Soldiers of the rank and file know they cannot win the war, but their bosses are insisting that they must fight to a finish, especially as the war has created a booming war economy that is transforming the military generals into instant millionaires.

Paul Biya seems to have handed the treasury to the military but Southern Cameroonian fighters are clearly demonstrating that this war is not a war of money but a war of courage and strategy.

They have proven that even if the Yaoundé government is given the Federal Reserve (the American Central Bank), it will never win this war.

The dynamics are changing on a daily basis and the power dynamics clearly favor Southern Cameroonians and their fighters who are looking forward to the day the government will swallow its pride and call for real negotiations which will lead to an independent and strong Southern Cameroons with Sisiku Julius Ayuk Tabe and his colleagues taking the reins of power in their fatherland.