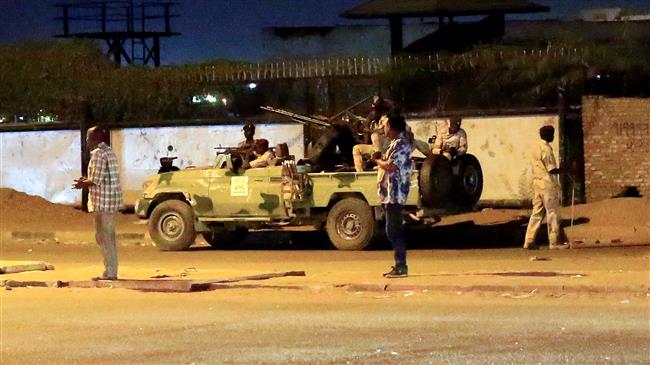 Sudan says it has quelled a revolt after hours of heavy gunfire between the government forces and former agents of president Omar al-Bashir in the capital Khartoum.

Gunfire erupted and some explosions were heard at some bases of the Directorate of General Intelligence Service, formerly known as the National Intelligence and Security Service (NISS) — the security arm of Bashir — early Tuesday afternoon, in what the government said was a violent mutiny over pay by members of the intelligence services.

Troops from operating centers of the intelligence started a rebellion in some parts of the capital, said government spokesman Faisal Mohamed Saleh.

He said a number of NISS troops had come out on the streets, set up barricades and opened fire in the air.

“This happened because those troops rejected the amount of money they got for their retirement,” Saleh said, adding that negotiations were being held.

Reuters quoted residents as saying that a security building was seized by gunmen near the airport.

The army said two soldiers were killed and five people injured in the gunfire. Medics said a 15-year-old boy and a soldier were among those wounded.

On Wednesday, the head of the sovereign council announced that it had reopened the airspace and that the army was in control of all intelligence buildings.

Lieutenant General Abdel Fattah al-Burhan also said he will never allow any coup to take place in the country.

Sudan’s prosecutor general called for removing the immunity of NISS troops involved in the revolt.

“Those members of the intelligence involved in what happened today have committed a crime … I call for their immunity to be removed so they can face justice,” the prosecutor general said.

The Forces of Freedom and Change — a key part of the transitional government — also said in a statement earlier on Tuesday that it was “assessing the situation.”

“We are calling on our people to be calm and not give a chance for those who want to drag our homeland into bloodshed,” it added.

Prime Minister Abdalla Hamdok said in a Twitter message that the situation was under control and that “this will not stop us from achieving the goals of our revolution.”

A senior member of the ruling council, General Mohammed Hamdan Dagalo, known as Hemeti, accused former intelligence chief Salah Gosh of being behind the rebellion.

He said he did not consider the unrest as a coup attempt, but such action would never be tolerated.

The former agents, who started the rebellion, were at the forefront of a bloody crackdown against demonstrations, which eventually led to the ouster of Bashir in April last year — 30 years after he took power in a coup.

At least 170 people were killed during the crackdown on demonstrations.

Late last year, a court sentenced Bashir to two years in prison for corruption and the illicit possession of sizable amounts of foreign currency.

The African country is now run by a transitional government, composed of military rulers as well as members of the protest movement.