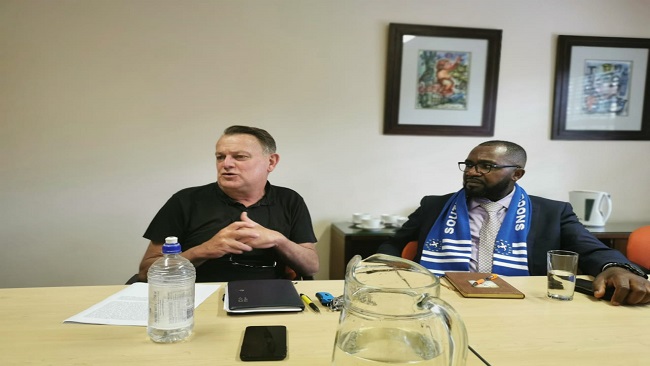 The South African Diary of Vice President Dabney Yerima: The making of an Ambazonian leader 0

It was, even by Vice President Dabney Yerima’s standards, a busy day – a meeting with representatives of the Denis Hurley Institute in the morning, a press briefing with the South African state television in the afternoon and a meeting with the Ambazonian community in Rustenburg by the evening.

Given this extraordinary schedule, it was no surprise to those listening to the Nsuhfor Dabney Yerima’s speech at the Denis Hurley Institute today that the Ambazonia leader appeared, as one Southern Cameroonian in South Africa put it, a little tired and grey.

Denis Hurley Institute is like the Department of Foreign Affairs for the South African Catholic Church and it all started with a message of hope to the people of Ambazonia and solidarity with President Sisiku Ayuk Tabe.

The leadership of the Denis Hurley Institute noted that more than 50% of Ambazonians in Ground Zero are Roman Catholics. Consequently, it is imperative for the Ambazonia Interim Government and the Roman Catholic Church to not only work together but collaborate to ensure justice is achieved for the people in the Federal Republic of Ambazonia.

A number of issues were also raised including the Ambazonia Restoration Forces; unity among Southern Cameroons exiled groups and education. Vice President Nsuhfor Dabney Yerima explained that Ambazonia Community schools are currently operational in many areas in Southern Cameroons under the protection and encouragement of the Ambazonia Restoration Forces and the Interim Government after a ban on all French Cameroun colonial education institutions.

Comrade Dabney Yerima assured the Denis Hurley Institute that the Interim Government understands fully the pain of Southern Cameroonians in Ground Zero and is committed to raising enough funds to equip the Restoration Forces, secure territory after territory, improve policing, train the Restoration Forces and guarantee every Southern Cameroons parent and child that schools are safe again without fear of rampant murder by French Cameroun terrorist Forces.

The Ambazonian Vice President appealed for humanitarian assistance from the Catholic Church in South Africa and revealed that the Interim Government recognizes the suffering and attacks on the Christian and Muslim churches in the so-called one and indivisible Cameroon.