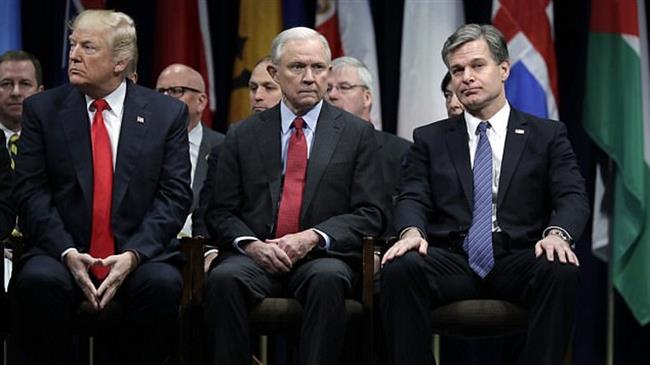 US President Donald Trump says he regrets naming Jeff Sessions as attorney general, as pressure on the White House grows from a special counsel’s probe into possible campaign collusion with Russia and obstruction of justice.

After The New York Times reported that Trump pressured Sessions to reverse his recusal from overseeing the Russia probe in March 2017, the US president confirmed his unhappiness over that decision in a tweet.

He quoted a Republican lawmaker as criticizing Sessions for not telling the president before becoming attorney general that he would have to recuse himself from the investigation.

“There are lots of really good lawyers in the country, he could have picked somebody else!” the lawmaker, Trey Gowdy, said.

“I wish I did!” Trump said in his tweet.

Trump has repeatedly lashed out at Sessions, who he hand-picked last year as the country’s top law enforcement official, as the probe into Russian election meddling, and possible obstruction, bores in on the White House.

On Sunday, Trump’s lawyer, Rudy Giuliani, said the investigation could ultimately result in an impeachment effort in Congress over alleged obstruction by the president.

“Eventually the decision here is going to be impeach, not impeach,” Giuliani told CNN in an interview.

The president has made clear he believes Sessions, a former senator who was active in the Trump campaign, should be helping him fight the probe, rather than standing to the side.

The Times reported Wednesday that Trump’s push for Sessions to reverse his recusal has become a focus of Special Counsel Robert Mueller’s probe.

Trump has gone on the offensive, seeking to paint the Mueller investigation, the Justice Department, and the Federal Bureau of Investigation (FBI) as biased against him, and is now calling the Mueller probe “illegitimate” and “rigged.”

Last weekend, he tweeted 14 times about the investigation, alleging that Democrats were behind what he called the “plant” of a law enforcement informant in his campaign.

Giuliani said Trump and his team have to take the fight to the public with an eye to a possible impeachment fight.

“”Members of Congress, Democrat and Republican, are going to be informed a lot by their constituents. So, our jury is the American — as it should be — is the American people,” he said on CNN.