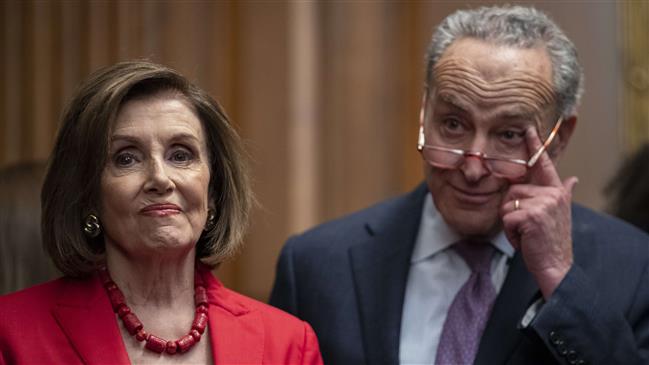 Senate Minority Leader Chuck Schumer has joined House Speaker Nancy Pelosi in calling on Donald Trump to come forwards and testify before an ongoing inquiry into potentially impeachable conduct by the president.

“Speaker Pelosi invited President Trump to come testify, and I think her invitation is correct,” Schumer said on Sunday during a press conference in New York, The Hill reported.

Earlier in the day, CBS’s Face the Nation aired an interview with Pelosi, during which she had said, “If he (Trump) has information that is exculpatory…then we look forward to seeing it.” “Trump could come right before the committee and talk, speak all the truth that he wants if he wants,” she had added.

The inquiry was launched after a whistleblower in the US intelligence community revealed that Trump had asked Ukrainian counterpart Volodymyr Zelensky to help incriminate Joe Biden. The former US vice president is expected to pose a serious challenge to Trump’s 2020 re-election hopes.

Trump and allies reportedly made the smear campaign against Biden, a pre-condition for military aide to the former Soviet republic and a gift meeting between Trump and Zelensky at the White House. According to a rough transcript released by the White House, Trump asked Zelensky during a July call to work with Rudy Giuliani, his personal lawyer, to “look into” the Bidens, namely Joe Biden and his son Hunter, who was hired by a Ukrainian gas company named Burisma.

Last week, the impeachment inquiry began taking hearings from key witnesses. The next batch of hearings is due later this week.

The White House has blocked almost everyone from cooperating with the inquiry, which it dismisses as a sham investigation.

Is Trump hiding anything?

Schumer, meanwhile, blasted a delegitimization campaign, launched by the president against the inquiry, which has seen him calling the probe “a witch hunt” and tweeting and retweeting derisive comments about it. Most recently, a tweet by the president bashed “The Crazed, Do Nothing Democrats,” who are behind the investigation.

Schumer also raised the question whether the president was afraid of giving testimony. “When Donald Trump refuses to come to the committee, now that Speaker Pelosi has invited him, when he doesn’t let all the people around him come before the committee, you gotta to ask the question, what is he hiding? Why is he afraid to confront what these people have said?” he asked.