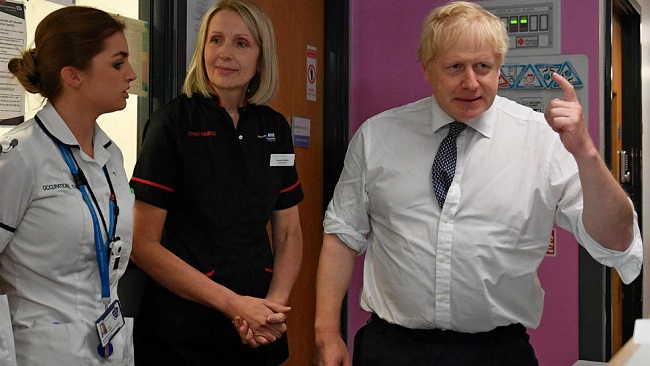 As Boris Johnson and his Labour opponent Jeremy Corbyn prepare to face off Tuesday evening in the first TV debate ahead of December’s general election, the condition of the NHS has emerged as a key issue in the campaign, with the head of the British doctors’ association warning that the UK’s beloved state-run National Health Service faces an “unprecedented crisis”.

British prime minister and Conservative leader Boris Johnson called the December 12 election in an attempt to secure a majority in the House of Commons, hoping thereby to “Get Brexit Done” – to quote the Tory campaign’s omnipresent slogan. But as medical staff decry insufficient funding and statistics show deteriorating performance figures, Johnson is taking emergency action in a bid to head off an NHS crisis while striving to present the Tories as the best party to manage the health service in England.

The head of the British Medical Association (BMA), Chaand Nagpaul, made an extraordinary public statement on November 2, saying that the NHS is “hurtling towards an unprecedented crisis this winter”, which tends to be the most difficult season for the service. In what appears to be a pointed comment directed at Johnson’s Conservative Party, which has been in power since 2010, Nagpaul added that “it should not take an election to take stock of just how bad the situation has become”.

Despite the pressures of an ageing population and the development of increasingly complex – and expensive – medical treatments, spending on the NHS has increased by just 1.5 percent a year over the past decade, compared to a historic average of 3.7 percent since its foundation in 1948. “Over the last 10 years or so, the NHS has been quite significantly under-resourced,” said Jonathan Holmes, a policy adviser at the King’s Institute, a British think-tank specialising in healthcare.ADVERTISING

In a sign of the party’s concern, the Conservative Home website, the bible of the Tories’ most tribal activists, published a piece on November 9 titled: “Is the Conservative campaign about to run headlong into an NHS winter crisis?”

Statistics lend credence to fears of a crisis. NHS data published on November 14 showed that waiting times in hospitals’ all-important accident and emergency (A&E) departments in October were the worst on record in England.

“Over 80,000 of the very sickest patients had to wait over four hours for a hospital bed last month, and that’s before we’ve even seen very cold temperature in England, or experienced many flu or norovirus outbreaks,” said Patricia Marquis, the Royal College of Nursing’s director for England. “Many nurses I speak to say they are very worried they won’t be able to provide the care they would like to once winter sets in,” she continued.

Soon after the BMA’s statement in early November, The Observer newspaper reported that Johnson was attempting to fend off a crisis by setting up an “operations unit” inside 10 Downing Street to take direct oversight of the NHS – the first time a prime minister has done so.

A statement on the Conservatives’ website says that, “because of the Brexit deadlock”, the health service “recently hasn’t had the attention it deserves”. To give it such attention, the party proposes to increase the NHS’s annual budget by £20.5 billion (€24 billion). Labour has proposed spending another £5.5 billion (€6.4 billion) per year on top of that.

Considering that they have historically been distrusted for their stance on the NHS, “the Tories are doing everything they can to reassure voters that they’ve got the message that more now needs to be spent on it”, noted Tim Bale, a professor of politics at Queen Mary, University of London.

The two parties’ funding promises reflect the public’s priorities: polls suggest that the NHS is a bigger issue for voters than Brexit, which has dominated British political discourse for three years. A survey by Panelbase published at the end of October found that healthcare was the most cited issue when voters were asked to name the most important issues facing the country – mentioned by 66 percent of respondents compared to 54 percent for Brexit. Similarly, pollsters Opinium found in a November 1 survey that 59 percent listed healthcare as a top concern, putting it well ahead of Brexit at 52 percent.

Yet it remains to be seen whether Labour can instrumentalise the state of the NHS for its electoral purposes. “It has always been a Labour issue but the Conservatives are picking up the zeitgeist,” said Sir John Curtice, a professor of politics at Strathclyde University. Given the Tories’ proposals to raise spending, “all we’re arguing about is: how much of an increase do you want?”

At the same time, Labour suffers from a “broader problem about voters’ perception of its competence, which feeds into voters’ ideas about how they will run the health service”, Curtice continued.

That said, the most (in)famous – and perhaps most successful – campaign line in the UK over recent years related to the NHS. It was the Vote Leave campaign’s vow, ahead of the 2016 Brexit referendum, to spend £350 million per week on the NHS that would supposedly be liberated from Brussels after Britain leaves the EU. In the current election campaign, Corbyn has produced an attack line that plays both on voters’ fondness for the NHS and their views about Brexit. He has accused Johnson of wanting to “sell out” the health service to President Donald Trump (who is unpopular in the UK) in a post-Brexit trade deal with the US.

The Conservatives have repeatedly stated that the NHS will be off the table in any future trade talks with Washington, while the British health service has long outsourced some contracts to US companies – to little public complaint. “Labour is stretching the argument when they say a US-UK trade deal would be a threat to the NHS,” noted Michael Keating, a professor of politics at Edinburgh University.

But that makes the argument no less potent, Keating continued: “The Conservatives are very vulnerable on this notion; and if Labour combine it with a winter crisis, creating a series of issues to give a sense of a threat to the NHS, it could be a factor” in the election’s outcome.