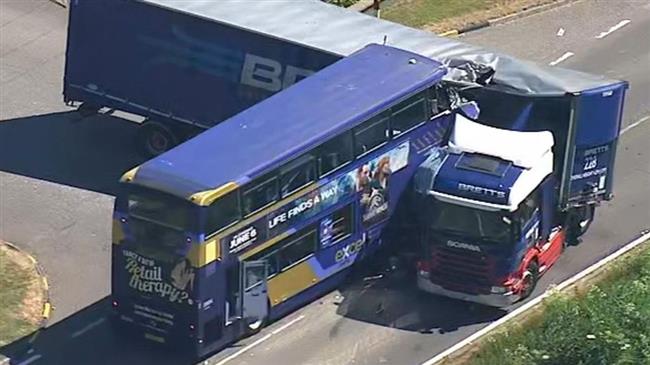 A crash between a double-decker bus and a lorry in Cambridgeshire, eastern England, has left two people dead and 18 others injured, police say.

The collision took place on the A47 Thorney Road in Guyhirn, a village near Wisbech, around 7:30 a.m. local time (0630GMT) on Tuesday.

Reports said the deceased were the bus driver, in his 50s, and a passenger, in his 70s.

“We are sorry to report that two men, traveling in the bus involved in the A47 collision, have sadly died. Our thoughts are with their families at this time,” said Cambridgeshire Constabulary’s official Twitter account. “Seven people have been seriously injured and 11 have minor injuries following the collision.”

Police noted that those who were seriously hurt had a combination of broken bones and head injuries, including brain injuries.

Footage from the scene shows the bus, which had been traveling eastbound, rammed into the side of the lorry, which appears to have been heading westbound.

The East of England Ambulance Service said the casualties had been transferred to a nearby hospital for treatment.

A police spokesman announced that investigations continued at the scene of the collision and the road remained closed.