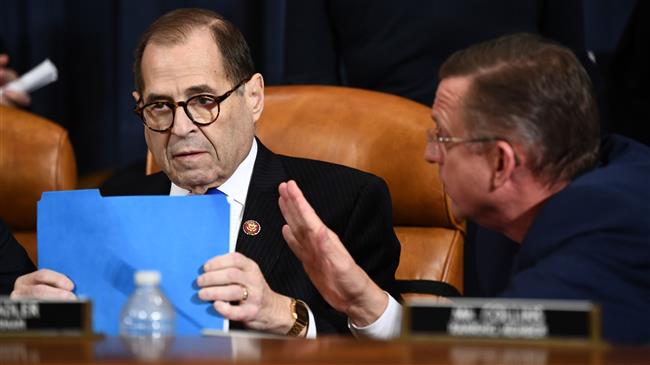 The head of a US congressional committee leading the impeachment probe against President Donald Trump has accused the US leader of putting himself before his country and violating his oath of office.

In a statement on Monday beginning a hearing in the US House of Representatives to examine evidence against Trump, House Judiciary Committee Chairman Jerrold Nadler, a Democratic from New York, said there was extensive proof that the Republican president has committed wrongdoing.

“The evidence shows that Donald J. Trump, the president of the United States, has put himself before his country. He has violated his most basic responsibilities to the people. He has broken his oath,” Nadler said.

The hearing on Monday is a key step before voting on an impeachment resolution, or articles of impeachment. The full House, which is controlled by Democrats, is likely to vote on whether to impeach the president before Christmas.

The House Judiciary panel is expected to vote by the end of the week on whether to send formal charges to the full House.

The Speaker of the US House of Representatives, Nancy Pelosi, the highest ranking Democrat in Congress, instructed the House Judiciary Committee Thursday to draft articles of impeachment against Trump.

Trump’s conviction is considered unlikely in the Republican-controlled Senate.

Only two American presidents have been impeached by the House, Andrew Johnson in 1868 and Bill Clinton in 1998. Neither Johnson nor Clinton was convicted by the Senate.

In 1974, then US President Richard Nixon resigned during his second term after it became certain he would be impeached and removed from office over the Watergate scandal.

House Democrats launched an impeachment inquiry against Trump in September after the unknown whistle-blower alleged the Republican president pressured his Ukrainian counterpart to investigate former Vice President Joe Biden and his son Hunter, who had served as a director for Ukrainian energy company Burisma.

Democrats are looking into whether Trump abused his power by withholding $391 million in US security aid to Ukraine as leverage to pressure Kiev to conduct an investigation that would benefit him politically.

Trump has repeatedly denounced the impeachment inquiry against him as “a hoax”.